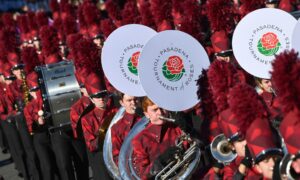 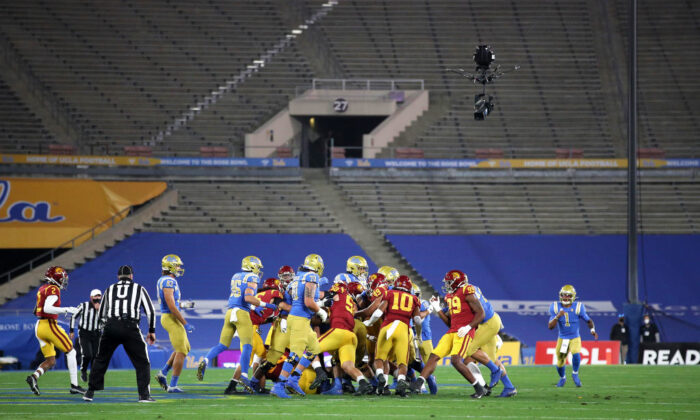 PASADENA, Calif. (CNS)—While lamenting the Rose Bowl game’s move out of Pasadena in favor of Arlington, Texas, due to a COVID-19-prompted ban on fan attendance, Gov. Gavin Newsom said Dec. 21 the state refused to put lives at risk by granting an exemption to the annual Pasadena tradition.

“We love the Rose Bowl,” Newsom said. “I don’t know how to best describe it. As a fifth-generation Californian, I feel like, you know, there was a Gold Rush and then there was a Rose Bowl. And so it’s been a big part of our lives—the Rose Bowl Parade, the game itself. I’m an avid sports fan, so I am eager to watch the Rose Bowl.”

But he said with the Southern California region’s hospital space dwindling rapidly and available intensive care unit (ICU) space becoming scarce, the county could not grant an exemption that would have allowed a limited number of people to attend the game in person.

The state’s health regulations allow sporting events to occur, but without fans in attendance. Tournament of Roses officials had sought an exemption to at least allow guests of players and coaches to attend, but the state twice rejected the request.

As a result, officials announced Dec. 19 that the game—a College Football Playoff semifinal—will played at AT&T Stadium in Arlington, Texas, on Jan. 1, 2021, with 16,000 people expected to be permitted to attend in person.

The game between Alabama, first in the final College Football Playoff rankings released Dec. 20, and fourth-ranked Notre Dame will be known as the Rose Bowl presented by Capital One.

The name Rose Bowl is co-owned by the Pasadena Tournament of Roses and city of Pasadena.

Newsom stood by the decision to reject the exemption request.

“We have to be stringent in terms of our rules, our regulations. We’ve got to do everything in our power to mitigate spread, and to mitigate mixing. So what they asked for was contrary to that determination into our medium- and long-term goals,” Newsom said.

“Obviously I’m disappointed. We’re disappointed that we had to make that call. But boy, hear me loudly—our reverence, our respect, our admiration, our pride that comes from the Rose Bowl, and obviously the impact it’s had on Pasadena, the entire region, the international identity that we receive every year from it, economic vibrancy that comes out of it, the brand—I mean everything about it.

“And so just know that none of this is what we want to do. It’s what we have to do in order to mitigate the spread and be responsible at this moment at peril of regretting the decision and … putting people’s lives at risk.”

The Rose Bowl is the oldest bowl game. The first game was played in January 1902, and the annual tradition began in 1916.

Since 1923 the game has been played at or near the beginning of every year at the Rose Bowl stadium in Pasadena, with the exception of 1942, when it was moved to Durham, North Carolina, for security reasons during World War II.