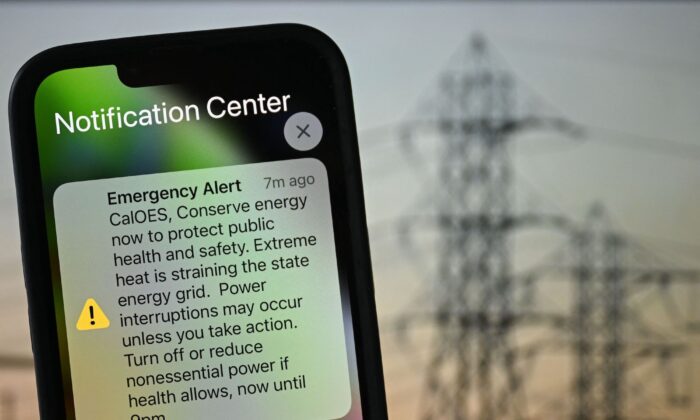 A photo illustration shows a background of electric power infrastructure with an Apple iPhone showing an Emergency Alert notification from CalOES urging the public to conserve energy to protect health and safety as the electricity grid is strained during a heat wave in Los Angeles, Calif., on Sept. 6, 2022. (Patrick T. Fallon/AFP via Getty Images)
Southern California

BEVERLY HILLS, Calif.—Alert messages transmitted to millions of cell phones, urging Californians to slash their power use due to strain on the state’s power system, worked dramatically well on Sept. 6, and staved off rolling blackouts, Gov. Gavin Newsom said the next day—but he expressed concern about over-using the message system.

Newsom, speaking to reporters in Beverly Hills, said 27 million messages were sent statewide calling for immediate power conservation, “and within minutes, we saw a roughly 2,600-megawatt reduction in usage.”

“Had that not happened, we would have had some episodic load reduction,” he said, referring to possible rolling blackouts. “That was extraordinary.”

The message was sent in an Amber Alert-fashion to millions of cell phones, which also received similar text messages, shortly before 6 p.m. on Sept. 6.

Minutes earlier, the California Independent System Operator (Cal-ISO), which manages the state’s power grid, had issued an Energy Emergency Alert 3, indicating that electrical demand was reaching the limit of overall supply, potentially leading to imminent rolling outages to reduce strain on the system.

But with residents statewide responding and heeding the call for conservation, Cal-ISO was able to avoid ordering any power cuts.

Newsom acknowledged the success of the cell phone messages, but said much debate went into the decision to send them.

“The challenge is … if you overuse that, it begins to dilute itself,” he said. “And so I’m hoping we don’t have to do that again. If we do do that again, please take it seriously. We don’t do that lightly. In fact we spent the last four or five days debating the merits and demerits … of even doing [that]. And then it was a decision that we needed to make in order to test the theory that this could be a game changer, and it turns out it was.”

As a prolonged heat wave continued, the state set a power-demand record on Tuesday, with Cal-ISO reporting a peak electricity usage of 52,061 megawatts, topping the 2006 record of 50,270 megawatts.

Cal-ISO is predicting a peak usage Wednesday of 51,164 megawatts, with Thursday’s prediction at 51,318. A Flex Alert urging conservation will again be in effect from 4 to 9 p.m. Wednesday, and Cal-ISO issued an Energy Emergency Alert 1 around midday, warning utilities statewide that shortages in supply could occur, while urging residents again to step up conservation efforts.

Newsom repeated that call Wednesday, noting that while the Flex Alert stretches from 4 p.m. to 9 p.m., the critical hour of 6 p.m. to 7 p.m. Tuesday was when conservation efforts really paid off.

“The peak hours we’re really focused on … 6 to 7 last night was really the pivotal hour where those text messages went out, people reduced energy and they got us through,” he said. “So we’re hoping again we don’t have to send the text message again tonight, but keep doing what you’ve done. One or two more nights of this and we will turn the page.

“We had a heat dome in August of 2020. It was a two-day period, record breaking. We usually experience this for one or two, maybe three or four days. This thing’s extending beyond a week and it’s putting stress and strain that’s unprecedented in the state’s history. But again I want to remind everybody this is not permanent.”