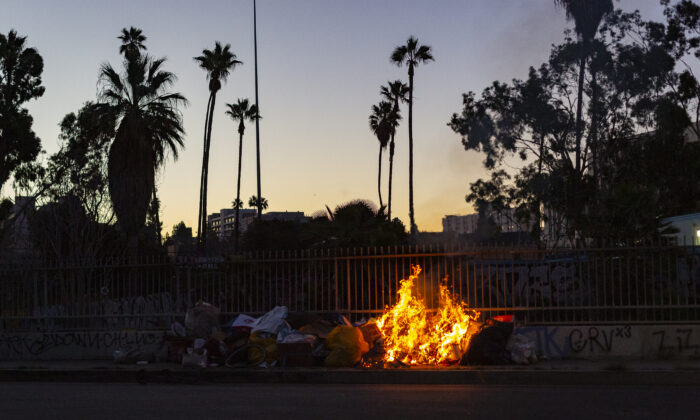 A day after a homeless encampment fire in San Francisco left one dead last week, California Gov. Gavin Newsom announced how $50 million in state grants will be doled out to various communities in the state to help provide housing.

“California is taking on the unacceptable status quo with a historic response to house thousands of our most vulnerable community members at an unprecedented rate, and swiftly addressing the encampments that pose the greatest threat to health and safety,” Newsom said in a statement on Feb. 24, a day after the deadly encampment fire in San Francisco.

The grant will provide housing to over 1,400 individuals in 19 communities in such areas as Orange and Santa Barbara counties and the City of Los Angeles, currently living in encampments.

Rewards for the counties and cities range from just over $300,000 to $5 million, and will rehouse between 18 to 200 individuals depending on the funding received, according to the governor’s office (pdf).

The funds are intended to provide 55,000 new housing units and $2 billion extra through the California Blueprint, the 2022–23 state budget to assist with behavioral health housing and encampment rehousing, according to the Governor’s Office.

The allocation of funds were granted on a competitive basis with each city and county applicants receiving scores based on prioritized encampments, safety and wellness, delivery of housing services, capacity of structures, personnel, and proposed budget, according to California Business, Consumer Services, and Housing Agency spokesperson Daniel Lopez.

While only a select number of cities and counties received grants, Newsom has proposed more funds go towards encampments that can total $500 million through the 2022-23 state budget, according to Lopez.

The state is seeking to clear 1,000 encampments by the end of 2022. According to the governor’s office—nearly half of that amount has been accomplished since the fall.

Newsom announced the grant after a fire outbroke near the Bosworth onramp on I-280 in San Francisco leaving three individuals injured and one dead.

“This tragedy is a devastating reminder of the dangers ten of thousands of unhoused Californians face every day, and the critical urgency we must bring to protecting the most vulnerable among us,” Newsom said in a statement.

However, some critics are not pleased with the handling of the homeless crisis in the state, claiming some lawmakers have “failed” to get the homeless population the help they need, even though $10.7 billion in funds were allocated through the state 2021-22 budget to provide 50 housing and homeless-related programs across the state—including Project Homekey.

“Reckless policies have made California into a state where homelessness is thriving,” California GOP Chairwoman Jessica Patterson wrote on Twitter.