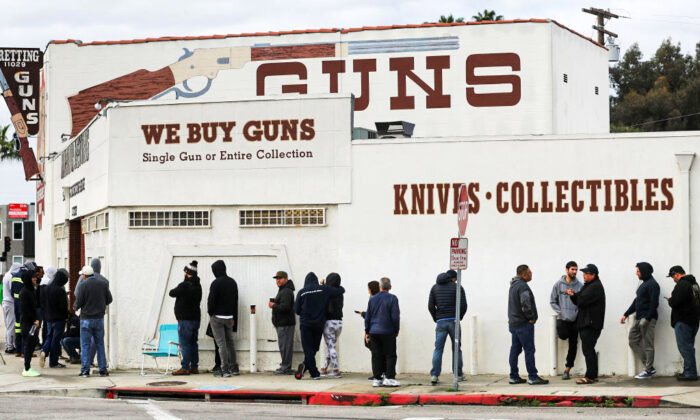 Even as crime is surging in California, Gov. Gavin Newsom and his allies in the legislature are seeking to make it more difficult for citizens to defend themselves.

Assemblyman Phil Ting (D-San Francisco) recently introduced Assembly Bill 1594, which reads, “This bill would specify that a gun industry member has created or maintained a public nuisance, as defined, if their failure to follow federal, state, or local law caused injury or death or if the gun industry member engaged in unfair business practices.”

It’s a blatant attempt to bankrupt the gun companies, a clear violation of the Second Amendment “right of the people to keep and bear arms.” The 2008 Heller decision by the U.S. Supreme Court clearly affirmed that meant an individual right, not just that of a state militia. And a right obviously can only be exercised if one has the physical means to do so.

For example, the First Amendment right to freedom “of the press” can only be exercised if paper companies are not impeded in their business of selling paper to publishers and the public. If the “paper industry” could be sued because, say, terrorists used paper to publish plans for attacks, then paper would go up in cost so high the exercise of freedom “of the press” would be impinged.

AB 1594 was introduced after Newsom reacted against a U.S. Supreme Court action that let stand, for now, a Texas law allowing private citizens to sue abortion providers. It’s by no means clear the court will let that law stand permanently. But Newsom said in a Dec. 11 statement, “If states can now shield their laws from review by the federal courts that compare assault weapons to Swiss Army knives, then California will use that authority to protect people’s lives, where Texas used it to put women in harm’s way.”

Newsom spokesperson Daniel Lopez reiterated that sentiment in a statement on Jan. 4, “So long as the United States Supreme Court has set a precedent which allows private citizens to sue to stop abortions in Texas, California will use that same ability to save lives.”

Actually, pro-lifers say abortion takes a life, and with modern medicine, childbirth rarely leads to the death of the mother. All medical procedures involve some risk, including abortions, not only for the baby, but for the mother.

Guns also are specifically mentioned in the Bill of Rights, while abortion only has become a right since the 1973 Roe v. Wade decision—still controversial—which the court might reverse or modify.

Explaining his bill, Ting said, “We must make our communities safer. Almost every industry in the United States can be held liable for what their products do, but the gun industry is not held to the same standard. Financial repercussions may finally push them to be more responsible by improving their practices and adhering to California’s strict gun laws.”

That’s misleading. Industries can be held accountable for the malfunction of their products, not their misuse. Car companies often have been sued when a system fails and a car crashes and kills people, but not for when a car is used as a weapon to kill, as in the recent slaughter in Kenosha, Wisconsin.

For guns, the proper use is for self-defense, sporting, and hobbies; improper use is to kill someone during a crime. Justifiable killings are allowed with guns, as with knives and other instruments, to fend off an attack by a killer or rapist. Ting’s law would make it harder for Californians to get such instruments of self-defense.

If the Texas abortion law were followed for AB 1594, then only gun manufacturers in California would be affected. But there apparently are no more manufacturers left of any size in the state, Sam Paredes told me; he’s the executive director of Gun Owners of California. “When Weatherby left Paso Robles for Wyoming in 2018, I do believe that they were the last major firearms company left in California,” he said.

So overregulation killed even more businesses and jobs in California.

Given that the Interstate Commerce Clause exists precisely to prevent the states attacking one another’s businesses through tariffs and lawsuits, it’s easy to see how AB 1594 would be rejected by the Supreme Court on that grounds as well.

What’s odd about this is how it plays into Newsom’s obvious presidential ambitions, either in 2024 or, more likely, in 2028. Supporting this bizarre legislation might help Newsom gain support among the more radical elements in the Democratic Party. So it could push him forward in future party presidential primaries.

But it would hurt him in any national presidential bid, especially in such pro-gun swing states as Pennsylvania, Michigan, and Wisconsin, which President Biden secured in 2020. Michael Anton of the Claremont Institute explained this in a Jan. 4 article, “Blue America’s Messaging Problem.”

That scorn might do well in Ting’s San Francisco, Newsom’s California, or New York City, but it’s a loser in every swing state.

Newsom, as I have said in past articles, is a shrewd politician who actually has maneuvered himself into potentially becoming the next Democratic president. Why he is putting himself into a corner of defeat this early is a mystery. Maybe he doesn’t see it because he’s spent his whole life in the cocoon of Democratic Party politics in California.