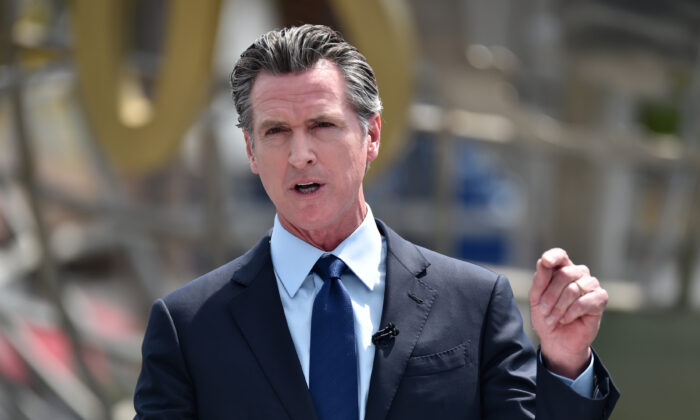 California Gov. Gavin Newsom will not be able to identify himself as a Democrat on the ballot in September’s recall election, a Sacramento County Superior Court judge ruled on Monday.

In filing his official response to the recall effort from February last year, Newsom’s staff failed to designate his Democrat party affiliation. The governor’s campaign asked California Secretary of State Shirley Weber to allow the affiliation to appear, but she declined.

Newsom then filed a lawsuit (pdf) in Sacramento County Superior Court seeking to require all recall ballots to include beside Newsom’s name the words: “Party Preference: Democratic.”  The recall election has been officially set for Sept. 14.

In the ruling, Judge James P. Arguelles rejected the governor’s request, stating that circumstances “do not justify excuse from the deadline.”

The law “unambiguously precludes party information from appearing on a recall ballot where the elected officer fails timely to make the designation,” the judge said.

Newsom’s office didn’t immediately respond to a request for comment by The Epoch Times.

Former Olympian Caitlyn Jenner, who is running as a Republican in the recall race, wrote on Twitter after the decision: “I am thrilled that the rule of law prevailed.”

“Joining this lawsuit was the first step of finally breaking down politics-as-usual in Sacramento where special interests and political cronies are placed above the good of the people,” Jenner added. “The end is near for Gavin Newsom!”

The recall election of Newsom, a first-term Democrat, follows mounting criticism from within his party and from Republicans over the governor’s handling of the COVID-19 pandemic and other issues.

He faced intense backlash after he was seen dining at the French Laundry restaurant with lobbyists last fall after telling Californians to stay home. Newsom apologized for the incident.

A spokesman for Newsom previously told news outlets that the recall campaign is a waste of money and that the governor would “rather focus on getting through the homestretch of the pandemic.”

The last time a governor was recalled in the state was in 2003 with Gray Davis. Residents voted yes on recalling Davis by 55.4 percent and selected one of 135 candidates on the ballot to replace him.

According to the National Conference of State Legislatures, California is one of 19 states where recalls are permitted.

The deadline to file for candidacy is July 16, and as of July 2, more than 70 candidates had filed to have their names on the ballot.