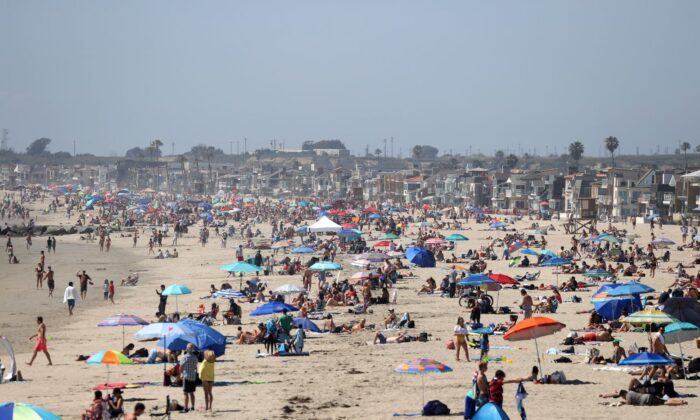 People are seen gathering on the beach north of the pier in Newport Beach, Calif., on April 25, 2020. (Michael Heiman/Getty Images)
By City News Service

NEWPORT BEACH, Calif. (CNS)—Gov. Gavin Newsom on April 27 lashed out at crowds who flocked to some Orange County beaches over the hot weekend—most notably Newport Beach—saying ignorance of social-distancing mandates is dangerous and could delay the state’s ability to reopen businesses and ease health orders.

“Those images are an example of what not to see … what not to do, if we’re going to make the meaningful progress that we’ve made in the last few weeks extend into the next number of weeks,” Newsom said.

“The reality is we are just a few weeks away, not months away, from making measurable and meaningful changes to our stay-at-home order,” he added.

“That is a very optimistic point to emphasize, however, that’s driven by data. That’s driven by behavior. And as we change our behavior, we can impact the science, the health, and the data.”

Thousands of people descended on beaches in Orange and Ventura counties to escape the weekend’s heat wave. Television news images showed crowds of people on the sand, and while many appeared to be trying to position themselves away from other beachgoers, others appeared to disregard such safeguards.

Beaches in Los Angeles County were closed, prompting some residents to drive to neighboring counties to enjoy the ocean breezes.

The governor was visibly frustrated over the images as he discussed them in his daily CCP (Chinese Communist Party) virus briefing from Sacramento, insisting the state has been making progress on “flattening the curve” of COVID-19 infections.

“We have to manage risk,” he said. “We have to manage and augment our behavior. And that’s why I cannot impress upon you more, to those Californians watching, that we can’t see the images like we saw, particularly on Saturday, in Newport Beach and elsewhere in the state of California.”

Newsom acknowledged that Newport Beach officials, recognizing the situation, have scheduled a special city council meeting for 3 p.m. on April 28 to discuss closing the city’s beaches for the next three weekends, and appointing a council committee to discuss business-reopening plans.

In a statement issued over the weekend of April 25-26, the city noted, “While most of the beachgoers were practicing responsible social distancing, the volume of visitors generated significant neighborhood impacts and ran counter [to] guidance from California State Parks to `stay close to home when you get outdoors. This is not the time for a road trip to a destination park or beach.'”

The governor said he respects local decision-making—and the political pressure being placed on local elected officials—but he said social distancing has to remain in force.

“I cannot impress upon people more: The only thing that will set us back is our behavior,” he said.

“As I said, weeks—not months—if the data continues to be as stable as it has been over the course of the last few weeks. The only thing that can stop that is more images like we saw over this weekend.”

Orange County CEO Frank Kim said he took a drive along the coast this weekend and noticed the large crowds, but he said he believes the problem will resolve itself as beaches are reopened in San Diego and elsewhere.

“What I heard was San Diego will open its beaches, so that will be a benefit to us, since we won’t see people coming up to Orange County from San Diego,” Kim said

“I don’t want to punish Orange County residents, keeping them away from the outdoors to recreate … I think the density will lessen as more beaches open.”

Kim said he also heard that the state’s beaches in the area were also set to reopen soon.

“Once they do that, it’ll spread out the crowds,” Kim said.

Orange County Parks officials in charge of enforcing social distancing at the county’s beaches told Kim, “It was not being followed as well as we hoped.”

While Newport Beach officials plan to discuss closing beaches, officials in Huntington Beach said people who gathered in that city over the weekend were taking precautions.

Huntington Beach police officials wrote on Twitter that, “Despite what’s being reported, the majority of our beachgoers are complying [with] social distancing.”

When they were not, they were “educated and have complied.”

Laguna Beach in March voted to close its beaches. The county has also closed parking lots to the beaches to help curtail crowds, but it has caused parking problems in some neighborhoods around the beaches, officials have said.