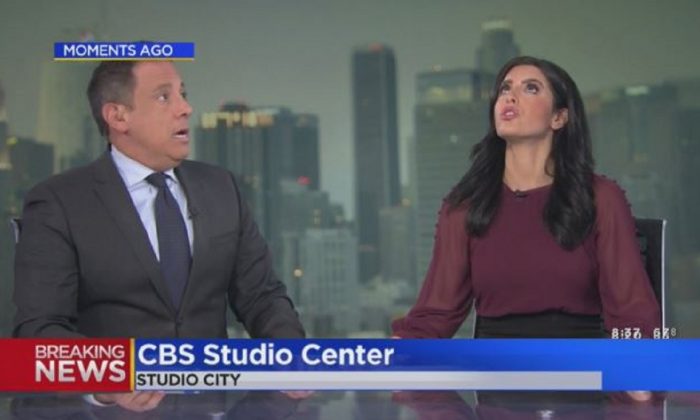 The 7.1 magnitude earthquake that struck southern California on July 5 prompted a news anchor to take shelter under a desk while on air.

KCAL9 news anchors Juan Fernandez and Sara Donchey looked around as the quake hit. Donchey told viewers, “We are experiencing quite a bit of shaking if you bear with us a moment.”

Los Angeles TV news anchors live on air during latest quake. They “duck and cover” and go under the news desk. pic.twitter.com/coqHGm21as

“We’re making sure nothing is going to come down in the studio here,” she added, before Fernandez said, “It is going for quite a bit, everybody.”

Donchey was soon gripping Fernandez’s arm as he said, “It continues to rattle very strong here.”

“This is a very strong earthquake,” Donchey said. “8:21 here and we’re experiencing very strong shaking. I think we need to get under the desk.”

“We’ll be right back,” she said, as she ducked under the desk.

WATCH: Very scary moments in the #CBSLA newsroom when the quake hit. @NewsJuan and @SaraDonchey were live on #KCAL9 when it happened. pic.twitter.com/SfgV3060eT

Donchey later took to the social media website to explain what she was thinking at the time.

“As a parent, the first thing I thought of was my infant son at home with my family and I was praying he was safe and comforted. Thoughts go out to all in Kern County right now,” she said.

My heart goes out to everyone in #Ridgecrest who are surely shaken after that massive 7.1 #earthquake. As a parent, the first thing I thought of was my infant son at home with my family and I was praying he was safe and comforted. Thoughts go out to all in Kern County right now.

She also joked about gripping her colleague’s arm, writing: “Poor Juan’s arm. I almost broke it.”

Fernandez responded to a user commenting that “it was very sweet that she grabbed your arm,” by saying, “She’s terrific.”

“We’re fine. Just quite the jolt,” he added in another post.

Other users also shared scenes from when the quake hit, including an 18-year-old who filmed the effects on a pool.

can’t believe i got this on video, earthquakes are not jokes! #abc7eyewitness #MSNBC #CNN #ridgecrest #anotherearthquake #California #californiaearthquake
everyone has permission to use this. pic.twitter.com/P7eVhZlekz

Viewer shot this while watching KCAL 9 News at 8pm @SaraDonchey and @NewsJuan as the 7.1 quake hit. Strong shaking from his apartment in MacArthur Park https://t.co/NeKC8t51eu

Another video showed an apartment shaking in MacArthur Park.

The footage was filmed by someone watching the KCAL newsroom on television.

Pictures circulating included ones showing roads ruptured by the quake.