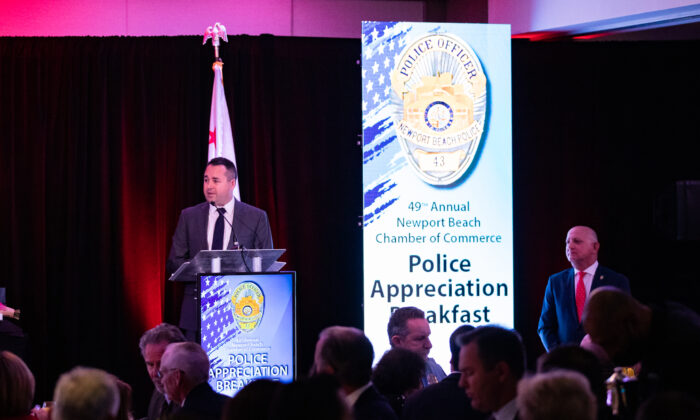 “The Chamber recognizes the Newport Beach Police Department in an effort to show how much residents and local businesses appreciate the work these men and women do for Newport Beach,” the Chamber said on its website.

Former NBC “Dateline” journalist Keith Morrison—who has reported in nearly every corner of the world during his long career—was the event’s guest speaker.

Newport Beach Mayor Kevin Muldoon spoke directly to the many police in attendance thanking them for their hard work.

Several officers, and one volunteer, were honored during the event for their outstanding roles in saving lives and working to prevent and stop crime.

Merit Awards were also given to those who exemplified service “above and beyond” and were awarded to: Officers Kyle Markwald, Christine Maroney, Court Depweg, Michael Dugan, Michael Fletcher and Bryan McMahon.

The event, open to the public, sold out with ticket prices ranging from $55 for singles to table sponsorships for $650.