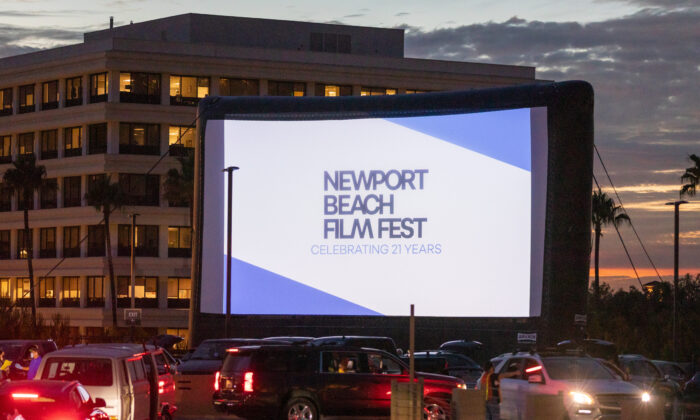 Cars line up for a rooftop screening of "A Life of Endless Summers: The Bruce Brown Story" hosted by the Newport Beach Film Festival in Newport Beach, Calif., on Aug. 13, 2020. (John Fredricks/The Epoch Times)
Southern California

The 22nd Newport Beach Film Festival is making a big return for the first time since the pandemic, holding live showings of over 300 different movies from 50 countries of all different genres.

The festival, which will go on for eight days from Oct. 21–28, will feature movies playing simultaneously at different theater locations throughout the county.

This year is a really big deal for the festival, as the April 2020 festival was moved to almost entirely virtual, causing huge income losses, and the April 2021 festival had to be rescheduled to the present time.

“During the pandemic, it was debilitating for us being shut down, it just completely devastated our business,” festival co-founder Todd Quartararo told The Epoch Times. “In 2020, when we were shut down, our festival was supposed to be in April. We had already had hundreds of thousands of dollars of sunk costs into producing our festival and then we were forced to close on March 15, and as a result, we lost 95 percent of our income.

“We’re just thrilled to be back,” he added. “And we’ll be returning and giving our audience the film experience that they’ve been craving and they’ve been missing for the last two years.”

So far, the response has been tremendous, Quartararo said, with many movies already selling out, causing the festival to add even more show times for those popular movies.

In 2019, the festival had 58,000 attendees, making it the largest film festival in Southern California, and while there is expected to be a large turnout this year, it is expected to be less than previous years due to pandemic-related capacity restrictions in theaters, which will only be 80 percent full.

Theater locations include the Lot, the Port, the Triangle, Edward’s Big Newport, and South Coast Village.

Those interested in buying tickets can purchase from any particular movie category available on the Newport Beach Film Festival website, with 22 different categories to choose from.

Both the opening and closing nights have sold out so far, which each feature a movie that is related to Orange County in some way.

For opening night, the festival is showing a world premiere documentary on Paul Van Doren, the founder of Vans shoe company headquartered in Costa Mesa.

On closing night, War on the Diamond will premier. It’s a sports film about the first batter that was ever killed by a pitch in a baseball game, with its producers from Orange County.

“We have such a diverse landscape in Southern California that with over 50 countries represented. It gives everybody an opportunity to see something that’s of interest to them,” Quartararo said.