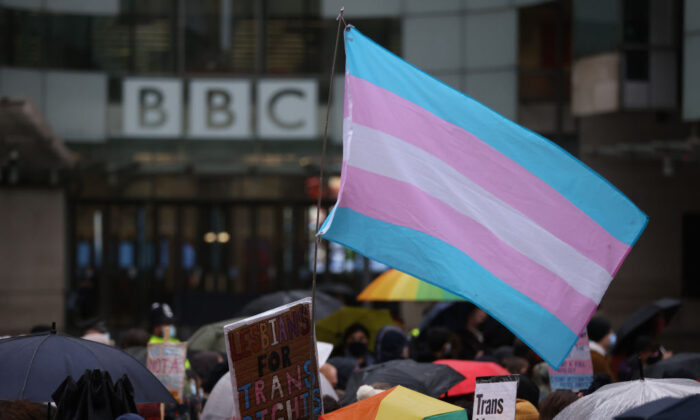 A lobby group has been training new BBC journalists on how to use their influence to lobby politicians on trans and nonbinary issues as well as attend protests, at odds with its strict historical impartiality guidelines.

On June 15, Stephen Nolan, a presenter on BBC Radio Ulster, talked to an anonymous BBC insider who told him that junior journalists had been given a training session about how “allies” should use their “magical powers” and influence to “affect trans rights for people.”

The Epoch Times has not been able to independently confirm what the BBC insider said.

The BBC is primarily funded by licence fees and has historically aimed to achieve due impartiality in all its output.

Nolan said that the BBC set up training earlier this week in which “new staff trainees just into the organisation were told to lobby politicians and were told to engage in protests for trans and nonbinary rights.”

“During that session, we were given a lot of different points of how allies could sort of use their influence to affect trans rights for people. And one of the slides was headlined ‘With Your Magical Powers of Being an Ally,'” said the insider.

“And it wasn’t until we got further down that slide that I realised that it talked about using your influence on politicians to affect change which was sort of the main point that they were trying to get across,” he added.

He added that they had a slide that was a gathering of people that looked like a protest, “and they said don’t be afraid to protest.” He added that there at no point in the training did anyone mention impartiality guidelines.

The Global Butterflies site is currently down, with a message saying “we will be back very soon. Thank you for your patience!”

However, an archived version of the site says that it was established in 2015 by Rachel Reese.

“Global Butterflies was created to bring awareness of trans and non-binary issues to the business sector. By working closely with companies, our hope is to help organisations adopt a zero-tolerance approach to trans-phobic behaviour and attitudes, while also taking steps to help them become more inclusive in their cultures,” it wrote.

Last year, Nolan’s podcast, Nolan Investigates looked at the influence LGBT organisation Stonewall had in public institutions across the UK, including his own place of work, the BBC.

He told The Times Of London last year that his colleagues warned him against reporting on transgender topics, saying it “could hurt his career and threaten his safety.”

On the show, Nolan read out a BBC statement acknowledging the course, saying that it was voluntary and included generic training materials provided by a third party, but “the BBC’s Editorial Guidelines are sacrosanct, our staff know this and they understand their responsibilities.”

The Daily Mail reported that BBC said that the “slide in question has not been included previously and will be removed for any future sessions.”

The Epoch Times didn’t receive a response to a request for comment from the BBC by the time of publishing.