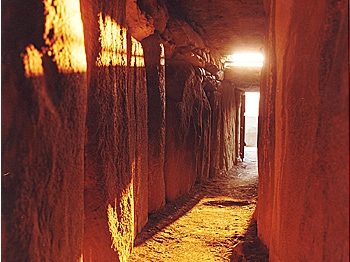 The passage way alight with the Winter Solstice sun at Newgrange, County Meath, Ireland (Courtesy of The Office of Public Works, Ireland)
US

Newgrange Marks the Dawn of a Fresh New Year

Martin Murphy
View profile
Follow
biggersmaller
Print
The longest night of the year had just passed, the dawn of a new day was about to begin and a handful of people were waiting in the darkness of the Neolithic monument at Newgrange, County Meath, for a finger of light to enter through the passageway and illuminate the central chamber just before 9 a.m., just as it did over 5,000 years ago when the monument was constructed.

Alas, the misty sky prevented the sun from making an even more spectacular entrance to the central chamber. The same phenomenon can be witnessed two days prior and two days preceding the December, 21st winter solstice. Fortunately for some of the other lottery selected participants there was a clear sky on Saturday.

Clair Tuffy from the Office of Public Works (OPW) who manages the site and the nearby Brú na Bóinne visitors' center spoke to The Epoch Times about this year's activity.

Mrs Tuffy explained that there was a strong sense as they entered the passageway that they were probably not going to see the sunlight in its entire splendor due to the overcast conditions. Therefore the whole experience took on a different feeling. "People were quite philosophical," said Mrs Tuffy.

George Eogan who has spent the last fifty years working in the Boyne valley, where Newgrange is situated, informed the group about the history of the surrounding area and of Newgrange itself, while they were all huddled in the central chamber.

Dr Edward C. Krupp the Director of Griffith Observatory, Los Angeles, also spoke to the group. "He was great talking about the astronomy and how important it would have been for the people 5,000 years ago," said Mrs Tuffy.

"We just chatted in the dark and waited … we could see a certain amount of a glow on the floor because daylight penetrates but we had no sunlight … It was still wonderful being there and knowing that the longest night is now over," concluded Mrs Tuffy.

Some of the Lucky Guests

The first person to emerge from the monument after sun up was Mrs Siobhan Ambrose who traveled from Tipperary. Mrs Ambrose was one of the lucky people to be selected to attend the event via the lottery selection process. "We were waiting anxiously for the sun to shine but unfortunately it didn't … It was well worth the journey and I'm glad I came," said Mrs Ambrose. She also advised anyone who got selected to make the effort to attend.

Mr and Mrs Robert Devriese, Belgium Ambassador to Ireland, braved the cool Irish weather to attend the winter solstice event in Newgrange as guests of the OPW. "It was an absolutely thrilling experience to be here", said Mr Devriese outside the 5,000 year old monument. Mr Robert Devriese and his wife also enjoyed the commentaries with respect to the history of the site given within the main chamber.

Joe Costello TD from the Labour Party said "It was great … it was an experience that I regard as unique and I was privileged to be here." Mr Costello is one of a fortunate few to have been blessed with attending the Mid-winter solstice on a prior occasion 25 years ago. He was still delighted to be there again even if the sun was shy.

Dublin's Lord Mayor, Labour Councilor Emer Costello thought it was a truly amazing experience. Like most others in attendance she was slightly disappointed with the weather conditions but the experience was still fantastic. Mrs Costello was particularly proud to be there because she and her family are originally from Dundalk which is situated close to Newgrange.

John Jameson who is an archaeologist with U.S. National park service in Florida described the experience as being wonderful, solemn and almost religious at times. Mr Jameson was in the chamber with his son in law Joseph Basford.

Mr Jameson was impressed with the community outreach that the Brú na Bóinne park has with the local community. “The local community for decades has protected this site, that should not be underestimated, that does not happen in large parts of the world … things [sites] are ransacked and not respected,” said Mr Jameson.

Dr Martin Mansergh TD, Minister of State at the Department of Finance, was also in attendance. The Minister jokingly said "I told a local parish priest yesterday that I was going to a pre-Christian celebration today."

Dr Mansergh was also reflective, "It's a strange and moving experience, when you come to Newgrange the New Year starts today, not in ten days time." The Minister also pointed out that the 5,000 years of history in this location also gives one a sense of perspective.

Those Who Traveled Just to Be There

The gloomy conditions did not stop the good humor and positive atmosphere that all onlookers brought with them. For many this nadir in the winter calendar, was cause for celebration as it marked the return to longer days and a fresh new year ahead.

The Bolgers from Trim, Co Meath traveled as a family to Newgrange because as Mr Bolger described it “sure it's great for the soul … there's enough doom and gloom, we just cheer ourselves up, the kids all love it, the fresh air, can't beat it with a stick.” Mr Bolger insisted that the children would be back in school some time that day.

For Peter McKenna from Derry it was third time lucky because for his two previous attempts he could not get access to the front section of the site due to the crowds so he visited the sister sites of Knowth and Dowth, however this year he finally made it to Newgrange.

Kevin Gartlan from Carrickmacross who has been coming to Newgrange for the past 25 years said, “We just come to honor our ancestors who built this massive tomb here and also to herald in the New Year and hope that it is better and more positive than last year.”

Newgrange was constructed approximately 5,000 years ago which dates it as being older than Stonehenge in England and the Great Pyramid of Giza in Egypt. Newgrange along with other similar sites in the Boyne valley called Brú na Bóinne (bend of Boyne river) such as Knowth and Dowth are designated a World Heritage Site by UNESCO.

Brú na Bóinne visitors' center which is run by the office of public works in Ireland was opened in June 1997 to interpret and protect the Neolithic monuments of Newgrange, Knowth and Dowth.

The center was set up to interpret the culture that built the monuments. It explains about their lifestyles their housing and their burial rituals. It has an exhibition that includes a full scale replica of the chamber at Newgrange. The center is also the starting point for all visits to Newgrange.