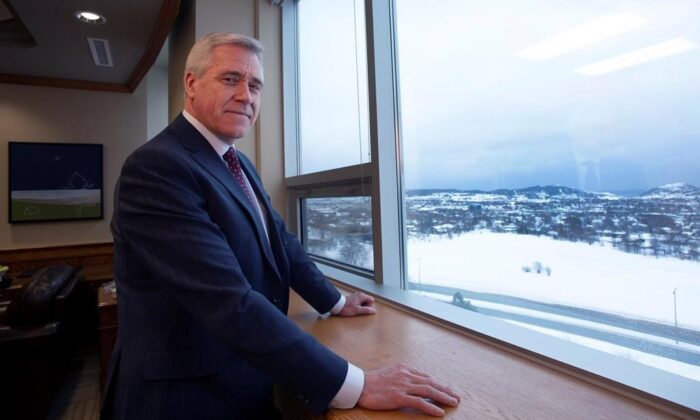 Newfoundland and Labrador Premier Dwight Ball poses for a picture in his office at the Confederation Building in St. John's on Feb. 18, 2020. (The Canadian Press/Paul Daly)
Canada

ST. JOHN’S, N.L.—Newfoundland and Labrador Premier Dwight Ball says the decision to step down as leader of the province was his alone.

The premier announced his intention to resign in a surprise, recorded video released Monday night, after more than four years leading the province and being re−elected last May with a minority government.

Ball, 63, tells The Canadian Press in an interview today he began considering the move over the holidays out of a desire to spend more time with his family, saying he was not asked by his party or caucus to step down.

The premier defends his choice to resign by video rather than at a news conference, saying he wanted to make sure his message was heard before speaking to the media.

Despite the province’s ongoing economic challenges, Ball says he feels “great” about his record and says he has left the province in better shape for his successor to take over.

Ball says he will stay on as the representative for his Humber−Gros Morne district until the next election and has asked the president of the provincial Liberal party to begin the leadership process.