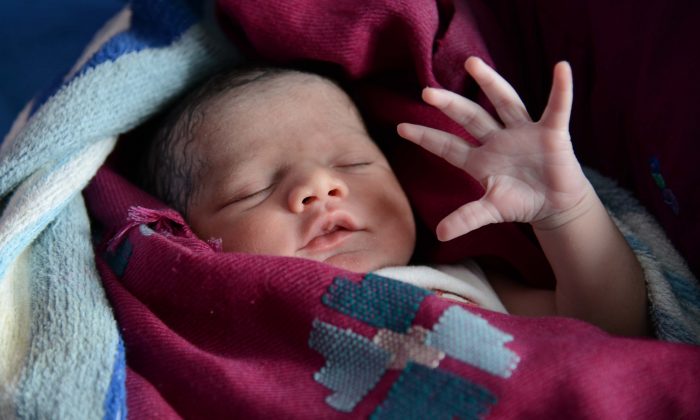 A newborn baby is pictured in India on July 11, 2013. (Narinder Nanu/AFP/Getty Images)
India

UPDATE: The Hospital Max Healthcare has confirmed that the two doctors involved have had their employment terminated. The “strict action” does not represent findings of fault against the physicians, but are a “reflection of our commitment to higher standards of care.”

A newborn baby that was declared dead has been discovered alive in a plastic bag on the way to his funeral.

The boy was one of a twin and was born prematurely at Max Hospital in Delhi, India, on Nov. 30. The other twin, a girl, was stillborn.

Doctors pronounced the boy dead after a spell on life support for arrhythmia—a condition in which the heart beats with an irregular rhythm.

“Due to arrhythmia, there might have been a lapse in checking the pulse of the newborn. But we need to ascertain the reason behind it,” a source told The Indian Express.

It was only when the babies were being taken to their funeral that the boy’s grandfather noticed the boy was moving inside a plastic bag.

“He immediately opened the cover and discovered that the baby was still breathing,” the boy’s uncle told the news outlet.

The family rushed him to a nearby hospital where doctors confirmed the baby was still alive. His condition remains critical, with the hospital saying he has a severe infection, according to the uncle.

“The hospital called us in the morning,” he said. “They said there is no negligence on their part; instead, a senior hospital official told us it is a ‘medical miracle.’ We told them we want an explanation from doctors, but they did not let us talk to them.”

Max Hospital said in a statement that they were “shaken and concerned at this rare incident.”

“We have initiated a detailed inquiry, pending which, the doctor concerned has been asked to proceed on leave immediately. We are in constant touch with the parents and are providing all the needed support.”

Chief Minister of Delhi Arvind Kejriwal said via Twitter that the incident is being investigated.

We have a small favor to ask of you. If you can, please share this article on Facebook so you can help support The Epoch Times. It takes less than a minute. Thank you very much!