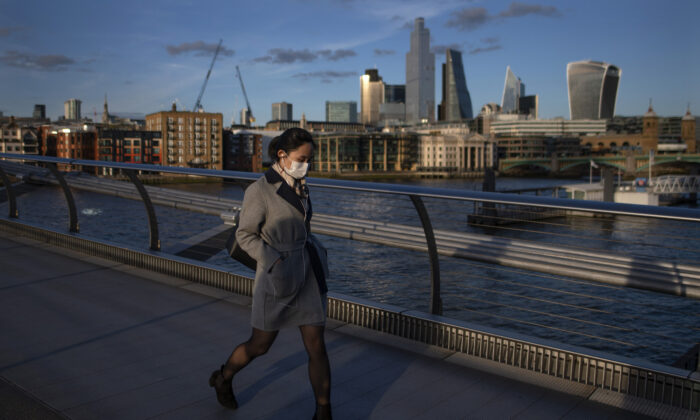 A woman crosses the millennium bridge wearing a face mask for protection against the corona virus in London, England on March 16, 2020. (Justin Setterfield/Getty Images)
AMERICA

A coronavirus patient who went to Newark’s East Orange General Hospital in New Jersey gave a false name and a false address to doctors, prompting the city’s mayor to urge her to come forward.

He said the patient, a female, tested positive for COVID-19, the disease caused by the virus. But she provided a false name and a Newark address, Baraka said.

When police arrived at the Newark address, they found no sign of the woman, the mayor said.

“As of today, she has not been identified,” he repeated, later describing her as a “young lady.” Newark officials are now working to obtain a court order to force East Orange General Hospital to give them a video and other information about the woman.

“We still have no knowledge of who this individual is,” Baraka said, adding that she is a “public health” threat due to her positive test.

Baraka didn’t say whether the woman will face any charges.

In Newark, the state’s largest city, authorities said a male resident in his 50s tested positive for the virus and was self-quarantined at his home, reported NJ.com. However, most of the state’s COVID-19 cases have been identified in Bergen County, authorities have said.

Bergen County Executive Jim Tedesco said the county is planning to close malls, non-essential retailers, and wants to ban groups of four or more people. They are to be implemented on Saturday starting at 8 a.m.

“As I said yesterday, while these may seem like extraordinary measures, these are extraordinary times. Our procedures make every attempt to be consistent with State guidelines, but we must remember that the severity of the situation in Bergen County is greater than any other area in the state,” he said in a statement to the Daily Voice.