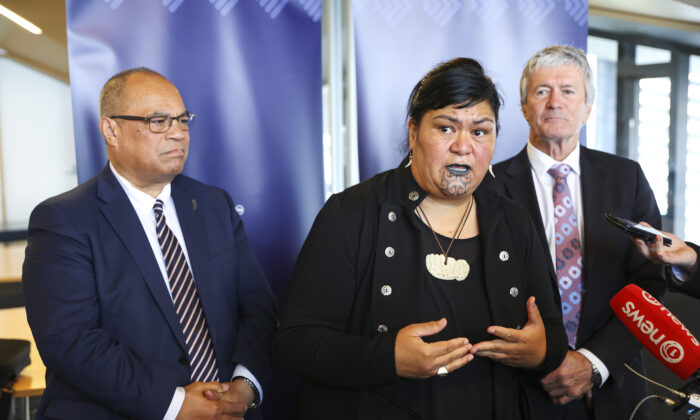 In a move likely to appease Beijing, New Zealand’s foreign minister is distancing the nation’s foreign policy away from close democratic allies, preferring to chart its own course on relations with the Chinese Communist Party (CCP).

Foreign Minister Nanaia Mahuta was speaking—in her second major address since assuming office—at the New Zealand China Council on Monday, where she outlined what the nation’s “contemporary relationship” with China would look like.

While Mahuta warned local exporters of the need to diversify their trade markets and raised concerns on Beijing’s expansion in the South Pacific, she indicated that the Ardern government preferred not to align with the Five Eyes’ nations on issues outside of intelligence-sharing.

“We are uncomfortable with expanding the remit of the Five Eyes,” she told reporters. “We would much rather prefer to look for multilateral opportunities to express our interests.”

“New Zealand has been very clear, certainly in this term since we’ve held the portfolio, not to invoke the Five Eyes as the first point of contact on messaging out on a range of issues,” she said.

“Matters such as human rights should be approached in a consistent, country agnostic manner,” she added.

“At times, we will do this in association with others that share our views and sometimes we will act alone.”

Alexander Gillespie, professor of international law at the University of Waikato, said the CCP would be pleased by the minister’s speech.

“This is a comment China will be happy with, as it will act as a brake on the expansion of the somewhat informal alliance that is the Five Eyes,” he told The Epoch Times.

The Five Eyes’ alliance—Australia, Canada, New Zealand, United Kingdom, and the United States—was formed in the 1940s originally as an intelligence-sharing network.

However, in recent years the network has been leveraged to discuss and partner on other pressing issues, including the economy, defence, Big Tech regulation, and foreign relations.

Foreign ministers from the Five Eyes’ have recently jointly condemned Beijing’s takeover of Hong Kong and the persecution of Uyghurs in China.

Peters—who governed in coalition with Jacinda Ardern during her first term—was consistently outspoken on Beijing’s transgressions, including its takeover of Hong Kong, its expansion into the South Pacific, and foreign interference.

However, following the 2020 landslide victory for Jacinda Ardern’s Labour Party, which saw Peters’ New Zealand First party ousted, the government has shifted in its position.

In early April, New Zealand opted out of criticising the World Health Organisation’s (WHO) investigation into COVID-19, despite WHO Director-General Tedros Ghebreyesus admitting information was withheld from investigators.

Mahuta, meanwhile, likened New Zealand-China relations to that of a Dragon and Taniwha, a mythical Maori sea serpent.

“There are some things on which New Zealand and China do not, cannot, and will not, agree,” she said.

“On many occasions, New Zealand has raised issues privately with China. Where there is tension between the Dragon and the Taniwha, we take a consistent and predictable approach through diplomacy and dialogue.”

New Zealand has long been accused of being the “soft underbelly” of the Five Eyes’ network, with critics panning the Ardern government for avoiding offending Beijing to maintain its trade relationship.

China is currently the nation’s largest export market, receiving over $20.1 billion worth of goods.

In January, New Zealand Trade Minister Damien O’Connor caused a diplomatic stir with close ally and neighbour Australia after suggesting it should show more “respect” to Beijing if it wished to emulate the “mature” relationship between New Zealand and China.

“If they (Australia) were to follow us and show respect, and I guess show a little more diplomacy from time to time, and be cautious with wording then, they too, hopefully, would be in a similar situation (to New Zealand).”