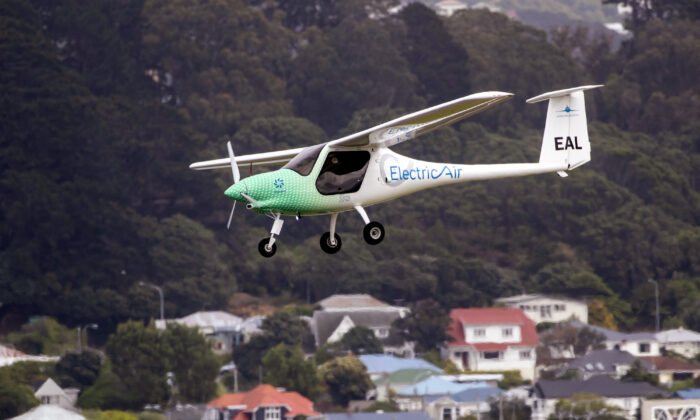 The ElectricAir plane is on approach before landing at Wellington Airport in Wellington, New Zealand, on Nov. 1, 2021. (Mark Mitchell/New Zealand Herald via AP)
Tech

WELLINGTON, New Zealand—As he made history by becoming the first person to fly across New Zealand’s Cook Strait in an electric plane, Gary Freedman thought it only fitting that the first thing he saw when approaching the Wellington coastline was the rotating blade of a wind turbine producing renewable energy.

Freedman’s 40-minute solo flight in the small two-seater came 101 years after the first person flew a conventional aircraft over the body of water that separates the South Pacific nation’s two main islands.

Wellington International Airport officials believe it may be the longest distance flown in an electric plane across any body of water.

Freedman said the day began badly with pouring rain at his departure point near the town of Blenheim. After delaying the flight for 15 minutes, the weather cleared just enough for takeoff and soon improved to sunny conditions over the ocean.

Freedman said he was ecstatic when he landed, and the technology worked better than he’d hoped.

“We still had 40 percent left in the battery,” he said. “We could have almost flown back again.”

Freedman, 49, founded the company ElectricAir. He took a trip to Slovenia to buy a Pipistrel Alpha Electro plane, and then jumped through various hoops with New Zealand aviation regulators to get the plane cleared.

It weighs less than 400 kilograms (880 pounds) and is much quieter than a traditional aircraft. For the 78 kilometer (48 mile) trip, Freedman flew it at just 1,000 feet (305 meters) above sea level and at the relatively slow speed of 130 kilometers per hour (81 mph) in order to preserve its charge.

Freedman said it takes about one hour to fully charge the plane. The maximum flight time is also about an hour, and he mainly uses it for pilot training.

She said electric technology is not yet advanced enough to power large passenger planes, but biofuels and hydrogen will likely provide greener alternatives in the future.