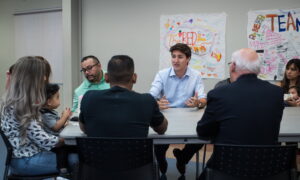 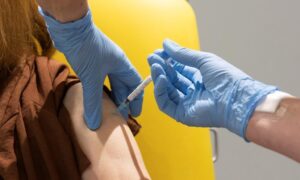 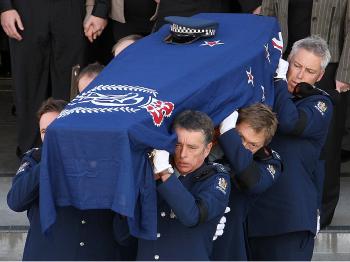 Officers carry the casket of Senior Constable Len Snee after his funeral on May 13, 2009 in Napier, New Zealand. (Marty Melville/Getty Images)
World

By Diane Cordemans
Print
AUCKLAND, N.Z.—The shooting of three police officers, one fatally, and the wounding of a member of the public earlier this month, has raised questions over how much longer the New Zealand police will carry out their duties unarmed.

Over 100 residents fled their homes in Napier's suburb Ahuriri in the county's North Island on May 7. Others remained locked inside their homes as crazed gunman, Jan Molenaar, kept police at bay for more than two days with high-powered rifles.

Constable Snee is the third police officer to have been killed in New Zealand over the last twelve months.

Since the Ahuriri tragedy, calls to arm the police force have become more strident.

New Zealand ranks among the few countries, including Norway, Ireland, and the United Kingdom, where police do not carry arms. Police officers currently carry batons, pepper spray, and some have taser guns.

Prime Minister John Key expressed doubt that the police needed to be armed.

“It is always an option,” he told NewstalkZB, “but … international evidence shows that the weapons are often turned on the officers themselves.”

When officers are carrying loaded weapons they become much less approachable.

“They have got to treat every member of the public as a suspect. We have got an approachable police culture so my preference would be not to arm the police.”

Controls around gun ownership were changed in 1983, seven years before the Aramoana massacre in which David Gray, a recluse, indiscriminately shot thirteen people, almost a quarter of the population of the settlement at that time.

Prior to 1983, firearms owners were required to register their guns with the police. Today, the only requirement is that gun owners register themselves every ten years.

Gun owners can acquire an arsenal of dozens of firearms. Molenaar had eighteen guns in his home.

In a Review of Fire Arms Control commissioned by the Police in 1997, Justice Thomas Thorp recommended a combined licensing/registration system with firearms to be re-registered every three years. It was not implemented.

Greg O'Connor, President of the Police Associations doubts that firearms will be registered in New Zealand as it would be very expensive. “There is a feeling that the horse has already bolted.”

Registering firearms will not affect criminals, he says. Molenaar was not a licensed owner and his arms were illegal.

“We are not getting involved in the arms debate at the moment. We will wait for the debate at a less emotional time.”

“What (police officers) want in the short term is tasers—something they can defend themselves with. The reality is that a large number of police officers are being assaulted on the job—far too many.”

Spokesman for the Minister of Police, Stefan Herrick, said that the Minister Judith Collins, would await the outcome of the investigations into the Ahuriri shootings before making a definitive decision on gun control.