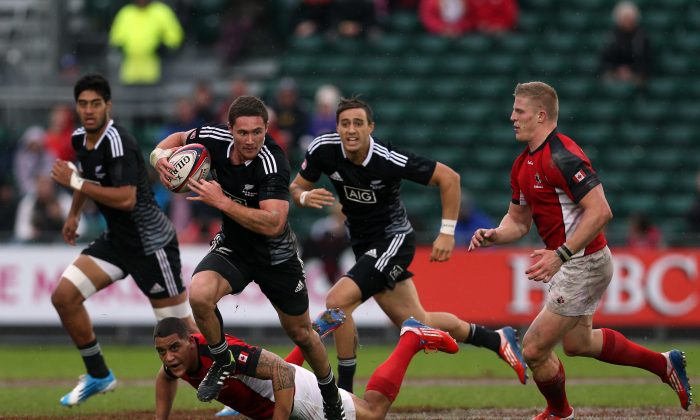 New Zealand’s Gillies Kaka drives forward in the Final against Canada at the IRB Glasgow Sevens at Scotstoun Stadium on May 4, 2014. New Zealand won this Final 54-7 and are all-but certain to win the series for the fourth consecutive time. CREDIT: (Ian MacNicol/Getty Images)
International

With just the London event to play this coming weekend (May 10-11) New Zealand stand 19-points clear of South Africa at the top of the standings having increased their lead by a further 12 points.

The surprise of the tournament was Canada reaching the Cup Final, but that is where their luck ran out as they were destroyed by a rampant New Zealand 54-7.

This leaves New Zealand in an almost unassailable position to take the Sevens World Series Cup going into the final event on 158 points – it will be their fourth consecutive title should they win. With the 22 being maximum points available per tournament only the out of form South Africa can pass 2013 London Sevens defending champions … just.

Coming into the London Sevens this weekend, New Zealand are followed in the standings, respectively, by South Africa (139), Fiji (129) and England (112). Among these four top ranked teams there has been generally a less than 12-point spread earned from one competition, so their standing positions are unlikely to change. However, Fiji with a good performance could move ahead of South Africa, who have not played well since their Cup Final loss to Fiji in Japan three tournaments ago.

Regardless, it is realistic to say that New Zealand will lift the cup at the close of proceedings in London.