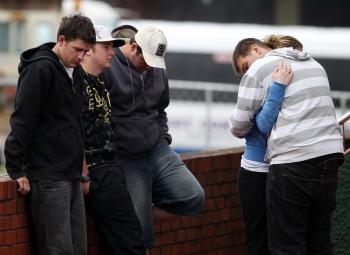 An attempt to rescue the 29 miners trapped in the Pike River coal mine, near Greymouth on the west coast of New Zealand's South Island, will be delayed until tomorrow, according to the Otago Daily Times.

It is more than 24 hours since the explosion occurred on Friday afternoon and families, who have been asked to remain at the Greymouth Red Cross Centre, are still waiting anxiously for news.

Whittall added that the rescuers were still waiting for an analysis of air samples to show that carbon monoxide are going down.

Gary Knowles, Tasman District Area Police Superintendent, told the Herald that the rescue effort would not go forward until the people involved in the operation are absolutely certain it is safe to enter the mine.

Knowles said a parallel could not be drawn with the Chilean gold mine disaster where the lives of 33 miners were saved by lowering supplies through mine shafts.

Dropping materials into the Pike River mine, which is a coal mine with hazardous gases, could cause a fire and endanger the lives of the miners, Knowles told the Herald.

Prime Minister John Key flew into Greymouth today where he has told the mining community to "hang on to hope."

Key, who visited the mine with senior ministers, has thrown his weight behind the rescue effort and promised every possible assistance to the families of the trapped miners.