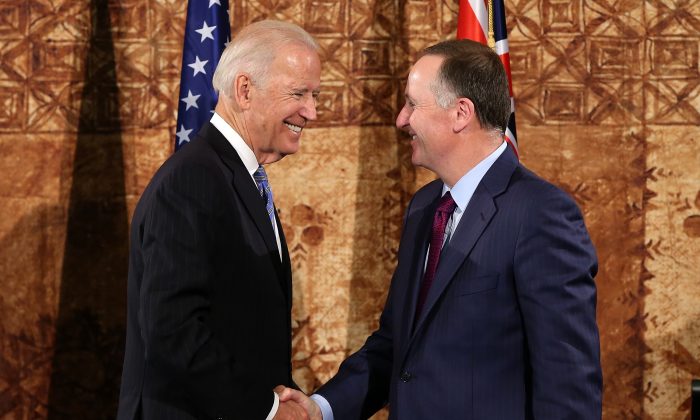 SYDNEY—Vice President Joe Biden said Thursday that the U.S. had accepted an invitation to send a Navy ship to New Zealand for the first time in three decades, signaling an end to a stalemate between the two countries that was sparked by New Zealand’s anti-nuclear policy.

New Zealand Prime Minister John Key announced during a joint news conference with Biden in Auckland that New Zealand had invited the U.S. to send a ship to participate in the Royal New Zealand Navy’s 75th anniversary later this year. Biden, who is visiting New Zealand as part of a tour of the Pacific, said he had gladly accepted the offer.

No U.S. warships have been allowed to visit the country since the 1980s, when New Zealand introduced its nuclear-free policy. Because the U.S. won’t officially confirm or deny if its ships have nuclear capabilities, New Zealand’s default position has long been to ban them from its waters. But as military relations have improved between the two countries in recent years, speculation had grown that New Zealand would allow the U.S. to participate in its anniversary celebration.

“It would be very odd for us to have all of our friends and acquaintances there, sending ships to celebrate our 75th Naval commemorations, and yet on the same point not have the United States there,” Key told reporters.

Key still needs to formally sign off on the ship visit. The prime minister said he did not yet know what type of vessel the U.S. was planning to send, but said it would still need to comply with New Zealand law, which requires that he be satisfied that any ship entering the country’s waters has no nuclear capabilities.

“We’ve found a way of respecting one another but agreeing that we’ve got a different position on these matters,” Key said.