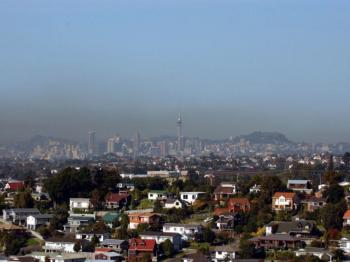 A brown pollution cloud thought to be caused by commuter traffic hangs over Auckland City in this picture taken from Aucklands' North Shore.(Ross Land/Getty Images)
International

By Diane Cordemans
Print
AUCKLAND—New Zealand will continue with plans to implement the Emissions Trading Scheme (ETS) on July 1, despite neighboring Australia looking to defer their ETS plans until 2013.

Calls from the business community, agricultural sector, and the Act Party for the government to defer the ETS in line with Australia's move are being ignored by the government.

Minister of Climate Change, Nick Smith, told Parliament Wednesday that it was too late to defer the ETS.

"There would be real instability and uncertainty in deferring the emission trading scheme's introduction at this late stage,” he said.

Some businesses that had already invested heavily and entered into contracts could suffer if New Zealand did not proceed with its commitments.

Claims that New Zealand is going it alone are not true, said Smith. Twenty-nine countries with Kyoto commitments have an ETS in place.

But, John Boscawen, Act Party member of Parliament and climate change spokesperson, said that 27 of those countries form the European Union bloc, which trades within itself.

European Union countries are on the same level playing field as increased costs are leveled across the board, he said in a press release.

New Zealand will be placed at a disadvantage as its major trading partners, Australia, China, and the United States will not have an ETS in place.

“It must also be remembered that the EU ETS has been structured in such a way that there have been massive exemptions and allowances so it doesn’t apply to large parts of the European economy,” Boscawen said.

“The fact is that the New Zealand ETS will impose a significant cost burden across all Kiwi families, businesses, and exporters.”

New Zealanders will see the price of electricity go up by five percent and the price of gasoline will increase by four cents a liter (1.05 quarts), the release said.