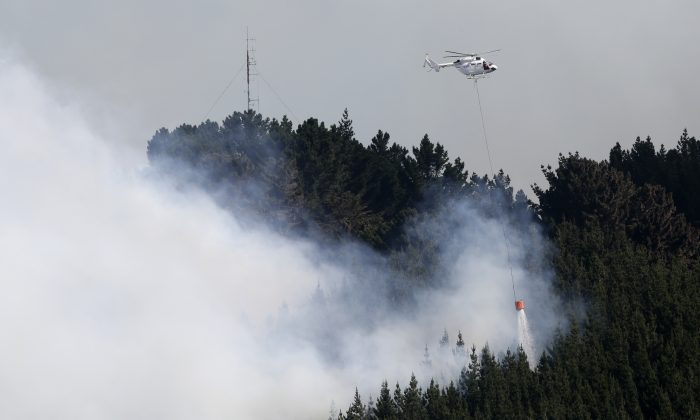 A helicopter dumps water on a wild fire in the Port Hills near Christchurch, New Zealand, Tuesday, Feb. 14, 2017. Up to 15 helicopters, and over a 100 firefighters have been battling two massive wildfires that have burnt over 700 hectares since erupting on Monday evening. (AP Photo/Mark Baker)
International

WELLINGTON, New Zealand—Firefighters in New Zealand’s second-largest city were able to halt a wildfire’s advance on suburban homes Thursday after it burned down 11 houses in the hill suburbs and forced hundreds of people to evacuate.

John Mackie, the civil defense controller for Christchurch, said about 130 firefighters on the ground assisted by more than a dozen helicopters had stopped the fire from encroaching further into the city.

He said the plan was to let it burn itself out, and that a forecast of rain over the weekend would help. He said the fire was spread over about 2,000 hectares (5,000 acres) in Christchurch’s Port Hills.

The cause of the fire remained unknown and was being investigated, he said.

A helicopter pilot who was a decorated soldier died in a crash while fighting the blaze earlier this week.

He said the region had been unusually dry for three years and the grass in the hills had turned brown over the Southern Hemisphere summer.

Police ordered the evacuation of about 400 homes while many others nearby were choosing to leave.

Broughton said displaced residents were staying at evacuation centers or with relatives.

“They need to look after one another, and make sure they have a place to go,” he said.

Phil Claude told Radio New Zealand he and his family ran down a grass track to escape the fire, which destroyed their home.

“I could see that the smoke and the flames were being blown right up toward our house,” he said. “And I just yelled ‘Get out. Get out!'”

A new mountain bike park, the Christchurch Adventure Park, was threatened by the fire.

New Zealand’s military was providing water tankers and engineering equipment as well as firefighters and other personnel.

The helicopter pilot who died while fighting the fire, Cpl. David Steven Askin, won one of the country’s top awards for bravery for his actions in Afghanistan.

Askin was a member of the elite Special Air Service and his identity was kept secret when he won the Gallantry Star medal in 2014. He was cited for efforts that included helping save guests during the 2011 siege of the luxury Inter-Continental Hotel in Kabul that left at least 20 people dead.