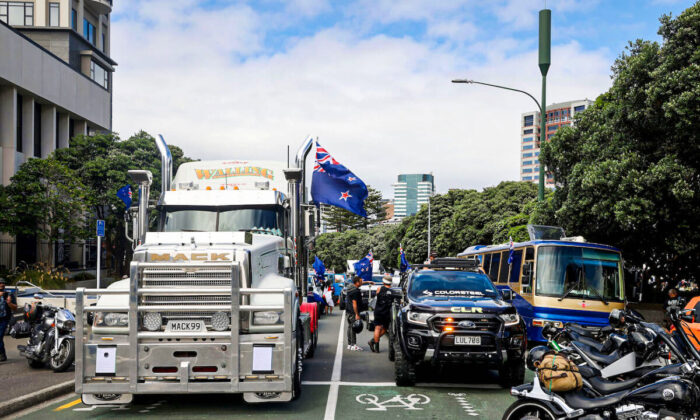 A convoy of trucks and other vehicles sit parked on the streets in front of Parliament during a demonstration against COVID-19 restrictions in Wellington, New Zealand, on Feb. 8, 2022. (Marty Melville/AFP via Getty Images)
Asia & Pacific

Hundreds of New Zealand protesters have gathered near the Parliament building in the country’s capital Wellington, demanding an end to COVID-19 restrictions and vaccine mandates.

Arriving in convoy from around the country, cars, trucks, camper vans, and other vehicles jammed the capital’s streets for hours as they got out to meet and speak on Parliament’s forecourt.

Protesters carrying signs and flags against vaccine requirements and other restrictions took to city streets.

In New Zealand, teachers, doctors, nurses, police, and military personnel are required to be vaccinated against COVID-19 as a condition of employment. Masks are also required in stores and among children over age 8 in school classrooms.

Vehicles covered with messages such as “give us back our freedom” and “coercion is not consent” stationed themselves in the streets surrounding the Parliament building, AFP reported.

Stu Main, from Wellington, told AFP that he believes people should be free to choose whether to be vaccinated against COVID-19, the disease caused by the CCP (Chinese Communist Party) virus.

“I’m actually vaccinated but I’m against mandating people to be vaccinated,” he said. “I think it’s disgraceful, forcing vaccination on people who don’t want it.”

Police told 1News they were monitoring the protests.

“We understand any delays for motorists as a result of the protest will be frustrating. Our staff will continue to monitor the situation and respond to any issues that may arise,” a police spokesperson told the news outlet.

Police also said Tuesday afternoon they hadn’t made any arrests and that protest organizers had asked protesters to move their cars and trucks by 5 p.m., ahead of the evening rush hour.

“Ninety-six percent of New Zealanders have gone out and got a vaccination, which has enabled us to live now with fewer restrictions because of the extra protection that has provided,” she said.

Ardern said last week that New Zealand would end its quarantine requirements for incoming travelers in stages as it reopened its borders. With about 77 percent of New Zealanders fully vaccinated, Ardern has also promised she won’t impose more lockdowns.

The protests in New Zealand come as trucker protests in Ottawa, Canada, enter a 12th day on Tuesday.

The “Freedom Convoy” in Ottawa consists mainly of truckers, and began as a protest against a COVID-19 vaccine mandate for drivers crossing the U.S.–Canadian border. Protesters have vowed to stay put until COVID-19 restrictions are lifted.