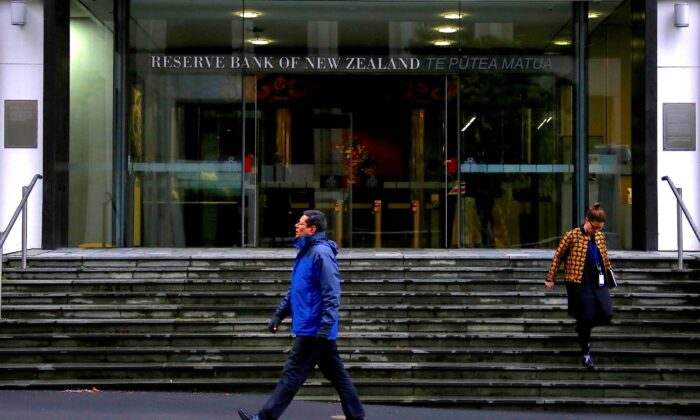 The Reserve Bank of New Zealand (RBNZ) has raised its official cash rate (OCR) by 50 basis points to 1.5 percent, its biggest such increase in 22 years amidst concerns about surging inflation.

RBNZ’s Monetary Policy Committee decided on April 13 that it was best to tighten monetary conditions at a speed that will support sustainable employment and maintain the stability of prices. The committee agreed that “moving the OCR to a more neutral stance sooner will reduce the risks of rising inflation expectations. A larger move now also provides more policy flexibility ahead in light of the highly uncertain global economic environment,” the bank’s press release said.

Inflationary pressures are rising, exacerbated by ongoing supply chain disruptions due to COVID-19. The Russian invasion of Ukraine has “significantly added” to the supply disruptions, causing international energy and commodity prices to spike.

Consumer confidence is being hammered due to high global economic uncertainty and inflation. Mortgage interest rates have risen, reducing the demand for mortgages. Domestic capacity is being constrained and employment is currently above “its maximum sustainable level.” Meanwhile, several businesses are being negatively affected by labor shortages, the bank stated.

RBNZ’s core inflation measures are at or above 3 percent. Inflation in New Zealand is facing additional upward pressure due to high prices of imported commodities and energy products. The committee members predict annual consumer price inflation to peak at around 7 percent in the first half of 2022. In December 2021, inflation in New Zealand was 5.9 percent, up 1.4 percent when compared to a year back.

This is the fourth straight time that RNBZ has raised OCR at policy meetings. Since October, the committee has increased rates by 125 basis points as inflation spiked to a three-decade high. However, the rapid rise in interest rates comes with the risk that it might hamper economic growth.

The Reserve Bank of New Zealand is playing “catch up” with the unexpected rise in inflation, Richard Yetsenga, chief economist at ANZ, said to FT.

“New Zealand is showing a pattern of tending to get more aggressive as the cycle goes on,” he said. “One of the elements [of today’s announcement] seems to be a signal that by lifting 50 basis points now, hopefully that reduces the amount they need to hike over the cycle.”

RBNZ’s hike in interest rates is similar to what is being adopted by central banks around the world that are concerned about rising inflation in their nations. In the United States, the Federal Reserve had hiked interest rates by 25 basis points in March.

While speaking at the Detroit Economic Club on April 11, Chicago Federal Reserve Bank President Charles Evans indicated that the Fed might issue a couple of 50 basis point hikes.

“Fifty is obviously worthy of consideration; perhaps it’s highly likely even if you want to get to neutral by December,” Evans said. “I think the optionality of not going too far too quickly is important. I would focus the attention on where do we want to be at the end of the year.”