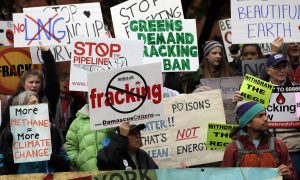 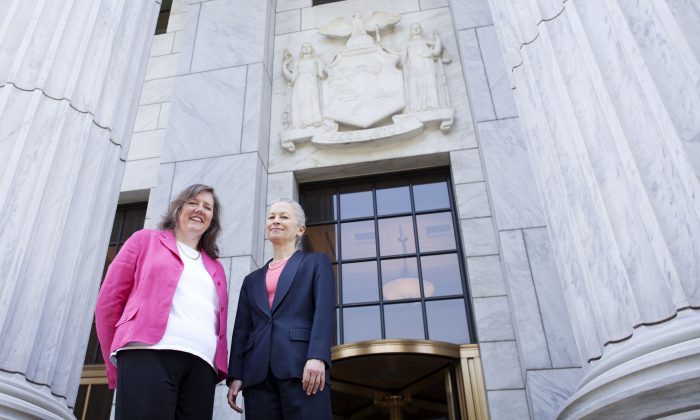 Helen Slottje and Deborah Goldberg stand on the steps of the Court of Appeals, shortly before oral arguments, in Albany, on June 3. (Courtesy of Chris Jordan-Bloch/Earthjustice)
New York

In a 5–2 decision, the Court of Appeals affirmed the legality of the bans instituted by the upstate towns of Dryden and Middlefield, a victory for opponents of the natural gas drilling method known as fracking. The case sets a precedent that will affect the bans and moratoriums on fracking in more than 170 municipalities in New York.

The 2011 bans in Dryden and Middlefield prompted Norse Energy Corp’s trustee and Cooperstown Holstein Corp. to sue the towns. The plaintiffs in the case had business interests in the towns and argued that the bans violated the state’s oil, gas, and solution mining law.

The court disagreed, saying that the law does not restrict the home rule authority of municipalities to regulate land use. The state law, said the court, only forbids towns from regulating the “details, procedures, or operations” of the oil and gas industries.

“The towns both studied the issue and acted within their home rule powers in determining that gas drilling would permanently alter and adversely affect the deliberately cultivated, small-town character of their communities,” Judge Victoria Graffeo wrote in the ruling.

Two lower courts had sided previously with the towns.

Jason Leifer has been a member of the Dryden town board since 2008. He was instrumental in persuading the town board and attorney to implement the fracking ban, an uphill battle at the beginning.

When he first started probing whether the municipal government could prevent the oil and gas companies from drilling in his town, he received demoralizing answers at every turn.

“It was challenging because, many times I was told, ‘This is impossible,'” he said. “When a town attorney tells you something couldn’t be done, you listened to him.”

Leifer was no ingenue, being an attorney himself with experience in drafting regulatory statutes. But it wasn’t until he teamed up with Helen and David Slottje that he saw a chance at pushing back the drilling companies.

They formed a task force to find a legal justification that could allow towns to reduce the impact of gas drilling. Scanning records of municipal ordinances and litigations, the husband and wife team found a 1987 case between a gravel company and the town of Carroll, N.Y., that provided the framework they needed to formulate Dryden’s fracking ban law.

The Chautauqua County town had changed its zoning ordinances to exclude gravel operations, winning litigation brought against it by the gravel company. The court ruled that the zoning restrictions pertained to land use and not industry regulation, and thus abided by state law.

The task force discovered the gravel case precedent in June 2010, and by January of next year they had drafted Dryden’s fracking-ban law.

The Future of Fracking

“They basically slammed the door in the [oil and natural gas] industry’s face,” Slottje said. “The language of the ruling had no ambiguity, it doesn’t leave any openings, no suggestions.”

The case doesn’t fall under federal jurisdiction, leaving the natural gas companies no chance to appeal. For municipal fracking laws to be bypassed, the state Legislature would have to pass new laws, which could be overturned by state courts.

Scott Kurkoski, who represented Cooperstown in the case, called for intervention from Albany to support fracking.

“Now, more than ever, we need real leadership from our state,” he said in a statement on Monday, “Once again our governor has remained silent while New York squanders the best opportunity for energy independence we have seen in our lifetimes.”

Slottje said that in the unlikely event of such a new law, a persuasive precedent set by Pennsylvania would back New York’s courts to strike it down.

For critics of fracking, the ruling was a battle won, but the war is far from over.

Alex Beauchamp of Food and Water Watch praised the decision as “fantastic and a huge victory,” that is “nationally important,” but stressed that more comprehensive restrictions are needed.

Beauchamp was at an anti-fracking rally with hundreds of other activists late Monday afternoon. They were encamped across the street from the Grand Hyatt Hotel, where Gov. Cuomo was hosting a campaign fundraiser.

Cuomo has not taken any action on the issue since taking office, maintaining the five-year fracking moratorium he inherited in 2011. Some have interpreted his reticence as support for the natural gas companies.

“He’s been putting it off, and that’s not what people want, we want a ban. It’s really important he takes a stance on this,” said Aileen Sheil at the rally. Sheil is a coordinator for the New York Public Interest Research Group.

Also at the rally was Zephyr Teachout, who plans to run against Cuomo in the Democratic primary for the governor’s seat.

“Governor Cuomo has avoided answering that question in a clear way, and every year that we avoid that question just invites lobbying by the fossil fuel industries to put more pressure on the state,” she said.