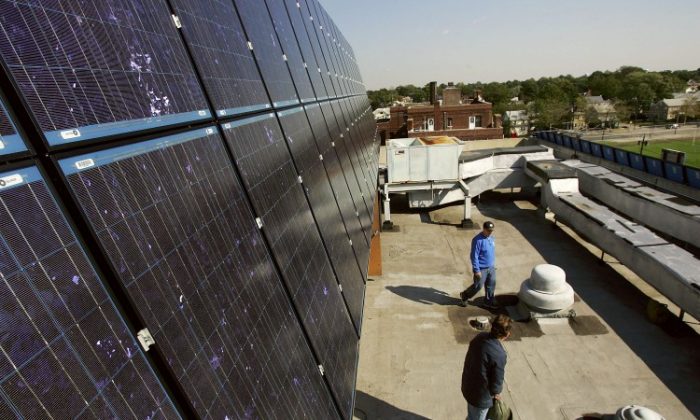 Solar energy panels are installed on Long Island in this file photo. (Spencer Platt/Getty Images)
US

NEW YORK—The solar industry grew at a brisk pace in 2011, with a 109 percent installation growth nationwide over 2010. New York state almost tripled its output, but has a lot of catching up to do—New Jersey outpaced the Empire State by 253 megawatts. New photovoltaic solar systems installed in New York produced only 60 megawatts of electricity, compared to New Jersey’s 313 megawatts in 2011.

Current policy, not a lack of sunshine, may be the biggest cause for the lack of installations in 2011.

“I think we have done a good job in putting solar on people’s rooftops but there is a much larger market out there. We have seen the growth exponentially in other states around us,” Carol Murphy, executive director of Alliance for Clean Energy New York (ACENY) said.

ACENY is an advocate for the rapid adoption of clean energy alternatives and energy conservation. “It is not a question of whether New York has the solar resources—it’s a question of if New York’s programs go far enough.”

New York’s plentiful sunshine and high demand for solar means it has enormous potential to increase its use of solar energy. But current policy only allows for rebates for 50-kilowatt systems, which typically suit the needs of residential, small businesses, or schools. These offer little incentives for large systems, which would significantly drive up the megawatts output of installed photovoltaic systems each year.

In addition to only offering rebates on small systems, New York does not currently have a long-term megawatts goal. New Jersey, an industry leader in solar installation, currently has a long-term goal of 5,000 megawatts by 2026.

“We are behind other states because we don’t have any solar specific targets over the long term in New York,” said Jackson Morris, director of Strategic Engagement at the Pace Energy & Climate Center, which promotes economic alternatives in the energy industry. “Until that changes, you will not see the investment in scale you are in states that have it.”

These long-term goals not only provide a target to help drive state policy to meet the goals, but make it easier for solar companies to answer to lenders about how long term their investment will be.

Murphy spoke about how several solar companies have shown interest in tapping into the solar energy potential in New York, but without beneficial policy, they have chosen to move their businesses to nearby states.

“They have actually come in and spoken to the Legislature and said, ‘We would really like to have an office in New York but we need to see something more than what you have right now to justify that,'” Murphy said.

Gov. Andrew Cuomo’s New York Sun Initiative, unveiled during his January State of the State address, aims to quadruple the state’s annual solar development by 2013. While the move is a step in the right direction, its changes are only guaranteed for a few years.

“The public support is there, the industry is booming—now all we need is the right policies to drive a robust and effective solar market in the Empire State,” Morris said.

As the weather heats up, energy bills climb—something that would be eased with more solar energy installed. Murphy said, “We think that the time is right to move forward on this and get the kind of savings for people because it is not only people who put solar on who benefit, it’s actually all of us who pay rates.”