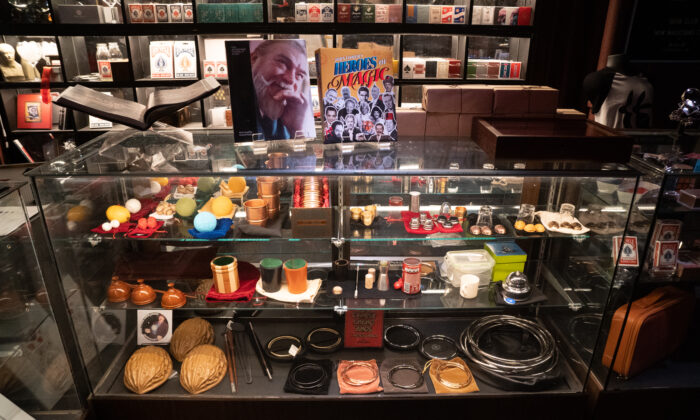 Brick-and-mortar store owners know a trick or two on how to survive, despite tough times
By Dave Paone

While three is a very small number, it’s not zero, and the owners of these shops are performing whatever hocus pocus they need to in order to stay in business.

Abracadabra NYC is 40 years old, and its current owner, Brian Clark, is the same age. The company was founded by Paul Blum and then purchased by Clark’s in-laws about 14 years ago.

Clark doesn’t have a background in magic but had worked as a service and parts manager for a car dealership for 20 years. “My inventory management is one of the things that landed me here,” Clark told The Epoch Times.

Doc Sasko is a magician, mentalist, and hypnotist who works at Abracadabra NYC part time, along with another magician, Apollo Riego. They demonstrate to customers how to perform the tricks for sale. Both magicians have been performing professionally for about 20 years each.

A big part of Abracadabra NYC’s business is the additional products it sells. “Outside of magic we carry about 20,000 different SKUs of other items as well, which helps us be able to survive,” said Clark.

The other items include a special effects, makeup and beauty department, a masquerade and wig section, animatronics and props for Halloween, and theatre-quality costumes.

Founded in 1925, Tannen’s Magic Shop in Manhattan is oldest of the trio. It was founded by magician Louis Tannen, but is currently owned by Adam Blumenthal. Prior to purchasing the store, Blumenthal was a working magician.

In addition to the locals who frequent his store, Blumenthal has international customers as well. “Tannen’s is kind of a pilgrimage for magicians from all over the world,” he told The Epoch Times.

Manhattan has had a long, rich history of magic shops.

“West 42nd Street in New York City has had more magic shops on it than any other street in the world,” Richard Cohn, an archivist and historian with the Society of American Magicians, told The Epoch Times.

These magic shops were also tourist attractions. Often children from New York’s outer boroughs and the suburbs would take a day trip on a Saturday into Manhattan just to visit one.

Cohn was one such child who took the railroad from Long Island to Tannen’s, which was on West 42nd Street at the time. “It was really like an Aladdin’s cave,” he said.

Part of the allure of going to these places was the young Cohn got to meet professional magicians who were in the stores at the same time. As the years passed, and Cohn became a magician himself, he would actually go out for drinks with them regularly.

“Talking to other magicians is one of the great things about a brick-and-mortar shop,” said Cohn.

Blumenthal had a similar experience—he was a customer at Tannen’s as far back as age 6—and currently has children come into Tannen’s regularly on Saturdays.

Cohn speculates the demise of these popular magic shops came about because of changing times, particularly how people spent their leisure time.

However, Blumenthal has faith in the industry and believe it’s a viable career path for young people.

“I think there’s probably more exposure to magic [now] than any other point, as far as the ability to see magic performed given how much is on TV these days,” he said. “I would say that ′Penn & Teller: Fool Us′ has put more magicians on TV than any other show in history.”

Proprietor Ron Diamond’s lifelong interest in magic began at age 8 in 1966 when his mother bought him a magic kit called Box-o-Magic for $3. It only had a handful of tricks in it but they were enough to get him started.

At 15 Diamond thought he could make additional money by giving lessons and selling magic tricks in a retail setting. He talked one of the merchants at an indoor flea market into letting him rent space in his booth where he set up a two-by-four-foot showcase with 12 tricks for sale.

Diamond continued to sell magic tricks. The retail locations kept changing and with each move got bigger. On occasion customers would ask for wigs, makeup, and costumes, and he’d get whatever items they were looking for. Now Ronjo was in the costume business. Naturally, Halloween is its busiest season for costume sales.

Diamond purchased his current location in 2000. When The Magic Shop in Hicksville closed eight years ago, Ronjo became the last-surviving magic store on Long Island.

Ronjo has a loyal customer base.

Mike Maimone of Port Jefferson Station has been purchasing tricks from there since he was 12 and he’s now 53. He owns about 350 decks of cards (each for a different illusion) plus another 250 magic tricks. More than half these items were purchased at Ronjo.

Regardless of the magicians in need of product and the annual Halloween business, there just wasn’t enough income to keep the store afloat.

Diamond needed another source of revenue and four years ago turned half of his retail space into what used to be called a “head shop,” where he sells cannabidiol (CBD) products and waterpipes, which used to be called “bongs.”

Abracadabra NYC depends greatly on Halloween and Christmas sales, just as Ronjo does. “That’s what allows us to operate 12 months out of the year,” said Clark.

Tannen’s has a source of income the other ones don’t have: the “Magic After Hours” tour. Magician Noah Levine gives a group of 18 people a “tour” of the establishment, but it’s really an interactive magic show.

Levine wrote the act and has been performing it several times a week for about eight years (although with the pandemic, it’s currently down to once a week).

Tannen’s also has a week-long magic camp each summer, for ages 11 to 20. It’s a sleepaway camp for 160 young people at Bryn Mawr College in Pennsylvania. Blumenthal attended as a child.

This uncertainty is nothing new to mom-and-pop stores. Neighborhood book and hardware stores are long gone. But for now, these magic stores in New York are still here.

When asked how he’s survived this long, Diamond said, “I don’t know; I don’t know.”