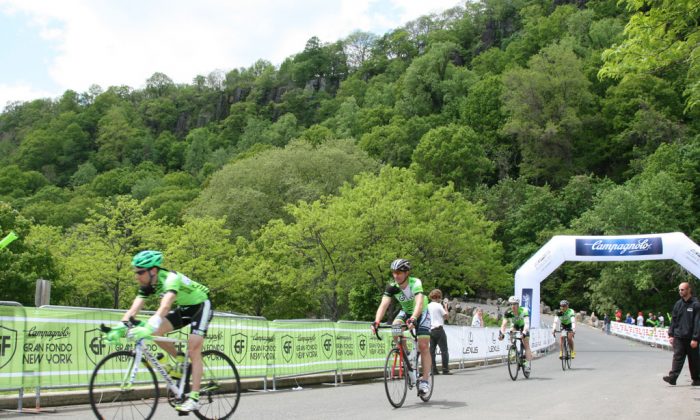 The mass-participation, long-distance race along the Hudson gets bigger every year
By Catherine Yang

NEW YORK—Ten years ago, Jessica Percasky started taking spin classes—then she realized she didn’t like doing all that work to go nowhere. So she bought a bike.

Early Sunday morning, Percasky and around 20 others from New Zealand joined four thousand cyclists from 70 countries to ride from Manhattan across the George Washington Bridge in the fourth annual Gran Fondo New York (GFNY).

“It’s fantastic. It’s in New York City—you can hangout for the week and live the dream,” Percasky said. This is the second year her group, mostly patrons of Scotty Brown’s bike store in New Zealand, have joined GFNY. “Just being able to see the world—I’ve seen more of New York City on a bike, and so much more outside of the city, and all of what we just rode.”

A gran fondo is a mass-participation, long-distance ride that is less competitive than the typical bike race. GFNY is a large-scale international amateur cycling competition, with a 50-mile and 100-mile ride along the Hudson River.

“It gets bigger every year,” said Lidia Fluhme, cofounder and president of GFNY, which has more than doubled in participants since the race started.

Fluhme, a former Wall Street investment banker, and her husband Ulrich, are avid cyclists and participate in races every year. They loved the experience of gran fondos in Italy and loved New York City, and four years ago resolved to combine the two.

“I love the freedom of it and the personal challenge,” Fluhme said. “I just like to challenge myself and go for long distances and challenging climbs, and being able to say ‘I did that, I accomplished something,’ makes me feel really good.”

She started out as a triathlete 10 years ago, but much preferred the camaraderie of riding with other cyclists. “The triathlon is really more of a solitary sport whereas cycling is more of a social experience,” Fluhme said. “Bringing all these people here to New York, and bringing really the world on bikes together, is really a special feeling.”

Andy McCoy from Iowa has been cycling his whole life for the social experience.

“It was my only mode of transportation when I was a kid,” said McCoy after finishing 100 miles. “If I wanted to socialize I had to ride my bike six miles.”

In Iowa, there aren’t any hills, McCoy said. GFNY’s route has four climbs.

“I love it, it’s very challenging,” he said with a laugh. “And I like the international flavor and being in New York City. There’s just so many different languages—you hear them on the bikes. People speaking Italian, people speaking Spanish, people speaking French.”

It’s the standard New York route, and many locals participated as well.

The camaraderie makes the sport less boring, said Jens Foehrenbach. He had been a runner until his knees would no longer allow it, but found he enjoyed cycling more anyway.

“The suffering, the distance, the views—it’s good. It’s longer, there’s more endurance, but it’s not as hard on the body in terms of impact. It’s not as boring [as running],” he said with a shrug. “More dangerous, more fulfilling.”

GFNY encourages cyclists who are not racers to participate and challenge themselves.

“I love riding bicycles, I do it all the time,” said Oscar Vasquez from Puerto Rico, who rode GFNY for the first time Sunday. He has been cycling all his life, and it is completely a part of his life. “If I go on a trip or vacation and I didn’t go on a ride, when I go home I take my bike out. I feel I need that.”

GFNY was the hardest ride Vasquez has done, and at one point he thought he wouldn’t finish. “But I made it.”

Vasquez doesn’t race. “It’s another attitude,” he said. For him, the New York trip is a vacation with his wife.

New Yorker Justin Bailey feels the same. Bailey’s done many long distance rides but never a race. “I heard it was the hardest one,” he said of the route. After finishing, he agreed.

“It’s relaxing, in a weird way. You get to escape and retreat into your own head a little bit, I feel like it clears up your train of thought,” Bailey said. “You’re stressed out, get on your bike, do a hundred miles. Whatever problem you have you’ll probably figure it out by the time you’re done.”