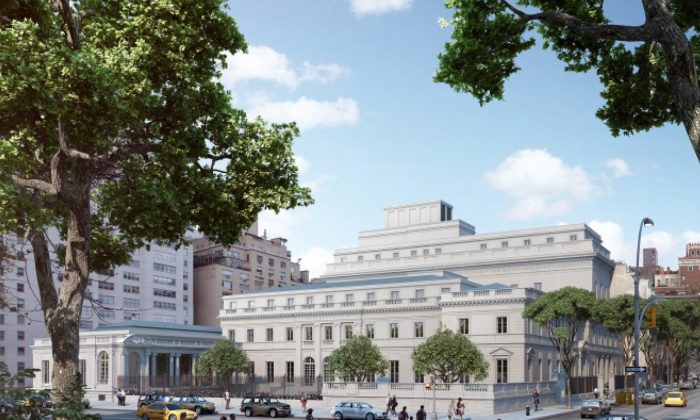 NEW YORK—The Frick Collection, known for its old master paintings and European sculpture, said Tuesday it is planning a major renovation that would expand the art museum by 42,000 square feet and open a second floor to the public for the first time.

The height of the new addition will match the six-story library building constructed in 1935, and will include more space for Frick’s auditorium and new classrooms in addition to expanding the galleries.

Both the Metropolitan Museum of Art and the Museum of Modern Art announced renovation plans earlier this year. These projects have been driven by a growing need for more gallery capacity, and the Frick Collection located just off Central Park on East 70th Street is no exception to this trend.

Attendance at Frick has been growing steadily in the past few years, with the museum posting a record-breaking annual attendance of 420,000 last year, in part due to the three-month winter exhibition of “The Goldfinch,” a painting 13 inches by 9 inches vaulted into minor celebrity status following the publication of Donna Tartt’s 2013 novel of the same name. Art lovers waited in long lines and subzero weather to see the miniature.

The Frick Collection is housed in a mansion built by the industrialist Henry Clay Frick before it was converted into a museum in the 1930s. The second floor still retains the original living amenities—bedrooms, study, and breakfast room—and the building is one of the few remaining Gilded Age residences in New York.

The additions are expected to be consistent in style and design with the original 1914 mansion.

“The evolution of the Frick has been marked by a combination of a consistent design vocabulary, high architectural quality, and respectful additions and alterations. Our design speaks to all of these themes,” said Carl Krebs, a partner at Davis Brody Bond, the architecture firm designing the expansion.