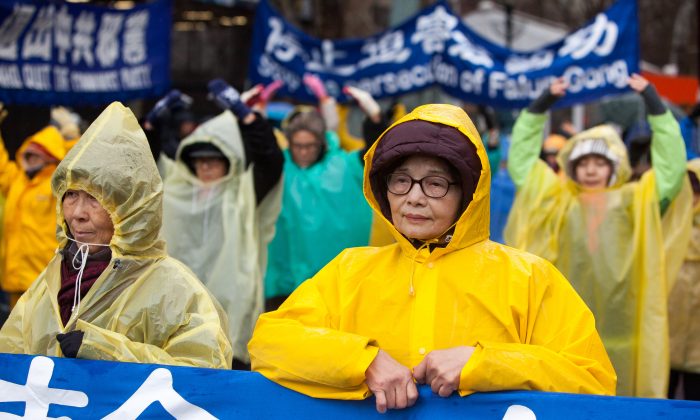 Falun Gong practitioners appeal for the end of persecution of their fellow practitioners in China on Human Rights Day in front of the United Nations offices in Manhattan, N.Y., on Dec. 10, 2014. (Petr Svab/Epoch Times)
New York

NEW YORK—In 1950, the U.N. General Assembly proclaimed Dec. 10 to be Human Rights Day. Wednesday morning, out in in the cold and wet, more than 50 Falun Gong practitioners gathered outside the U.N. in New York City, protesting the brutal persecution of Falun Gong in China.

Almost every one of the 55- to 60-year-old participants were refugees from China, now residing in the United States.

Organizers estimate that about half of those in attendance were survivors of torture meted out by the Chinese Communist Party (CCP). The Chinese regime has attempted to systematically eradicate Falun Gong.

David Tompkins, a spokesman for The Global Service Center for Quitting the Chinese Communist Party, also known as “Tuidang,” stressed that it was an appeal rather than a protest—a heartfelt appeal to the people of the world to speak up.

He’s quite clear that it’s a genocide that is currently taking place in China, and he believes it is incumbent upon the world’s citizens to stand up against it and oppose it.

Tompkins organized the appeal in the hope of drawing the attention of people working in the area, and in the U.N. itself, to the persecution of Falun Gong taking place in China. Attired in yellow and blue, Falun Gong practitioners performed meditative exercises and handed out fliers to passersby detailing the organ harvesting atrocities being committed by the CCP.

Tompkins is dismayed to see that China has been voted in as a member of the Human Rights Council, which he sees as “beyond hypocritical,” since countries on the council are supposed to have good track records regarding human rights.

Chinese media reported that China had agreed to cease organ harvesting as of Jan. 1, 2015, and the general consensus of the media touted this as a resounding success.

But Epoch Times reporter Matthew Robertson reported that a statement made by Huang Jiefu, a surgeon with a seat on the Chinese People’s Political Consultative Conference, an advisory body to the Communist Party, and director of China’s Organ Donation Committee, was not officially recorded. Some of the media reports were vague and “Huang was never actually quoted saying that organs from death row prisoners would not be used after Jan. 1, 2015, in any of the media reports on the topic,” according to Robertson’s report.

In Tompkins’s experience, government bodies are slow to change. These meditation appeals have been taking place for 15 years, with little in the way of success. He notes that the appeals to people’s hearts might have more of an effect in the long run.

As it stands, Falun Gong (also known as Falun Dafa) practitioners in China are also taking to the streets and appealing to their fellow citizens’ hearts, in the hope they might recognize the evil that is taking place right under their noses. However, their appeals don’t take the form of public group exercises, with visible banners.

Besides the fliers being handed out, individual cases of persecution were also being brought to the attention of onlookers. Yu Zonghai’s plight was being highlighted by his sister Zhen Jieyu, herself a victim of incarceration and persecution.

Yu, 57, who avoided having his leg amputated in 1994 due to the health benefits he gained after beginning to practice Falun Gong, was sentenced to 15 years imprisonment in 2001, for hanging a large banner, bearing the words ‘Falun Gong is Good,’ on a building of the Office of Public Security.

He has since been beaten to the point of being crippled, and has had most of his teeth knocked out from continuous beatings. Repeated electric shocks to his chest have caused him difficulties when breathing; his eyelids were abraded in the course of forced labor in unsafe textile factories.

His sister, Zhen Jieyu, who is advocating his case along with the International Society for Human Rights, has been physically damaged by injections of unknown substances she received after being placed in a mental institution.

The prison doctors had been taking regular blood samples from her, most likely in preparation for harvesting her organs, but ceased to do so once the substance they injected in her damaged her brain, making her organs unsuitable for transplant.

The reception from the public was difficult to gauge, according to Tompkins, since there were very few people on the streets that day. The few that commented were surprised to see people standing in the rain on such a cold day.