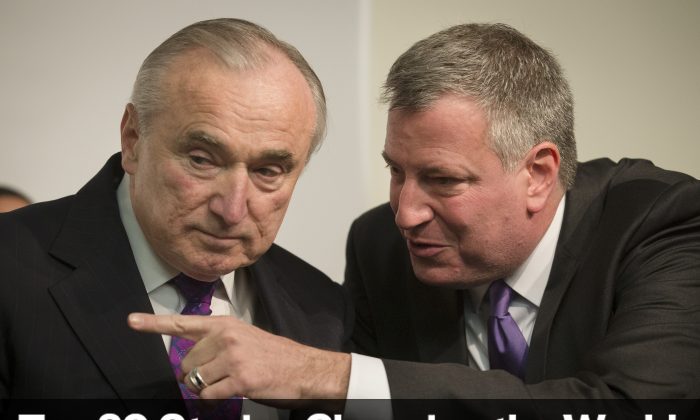 NEW YORK—The mayoral election in 2013 will be remembered for a lot of things, but no issue proved to be more influential than stop and frisk. Mayor-elect Bill de Blasio’s opposition to the police department’s controversial tactic propelled him, in part, to a historic victory.

In 2013, a landmark federal court ruling and a set of bills passed in City Council. These will influence policing in the city going forward. Bill Bratton, De Blasio’s pick for police commissioner, will be at the helm of the nation’s largest police force as the impact of these changes ripples to the rank and file.

Over the summer, the City Council passed two bills aimed at reforming the practice. One bill mandated that an inspector general oversee NYPD’s policies and practices. The other enabled citizens who felt they were racially profiled to sue the city, albeit not for monetary damages.

Shortly after the council passed the bills, a federal judge ruled stop and frisk was being done unconstitutionally and ordered a federal monitor to oversee how the practice was being conducted. The city appealed, but de Blasio has said he will drop the appeal when he takes office and moves forward.

The council bills as well as the court case fueled de Blasio’s campaign message of “ending the stop-and-frisk era” and bringing police and communities back together.

Bratton will begin his second tenure on Jan. 1 and will work on mending the fences between the police and communities of color that have been damaged during the Ray Kelly and Michael Bloomberg years.

Just days after being selected for the post, Bratton began to reach out to the community by visiting Reverend Al Sharpton in Harlem. Bratton will likely continue meeting with community leaders and pull from his experience in Los Angeles where he was lauded for bringing the police and community together.

Bratton’s experience with a federal monitor back in Los Angeles will help as he and de Blasio begin the new era in policing in the city.