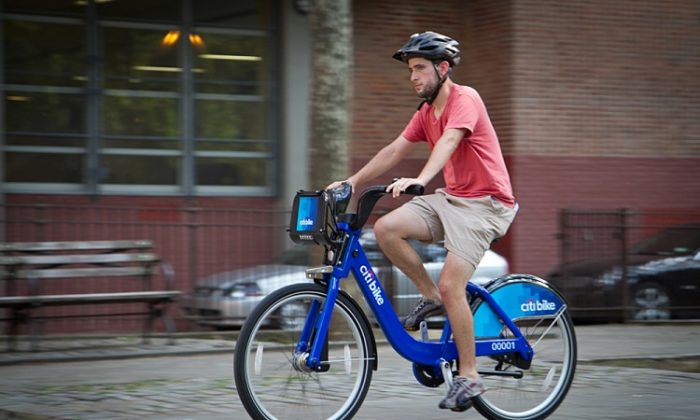 Tim Haney, tests out one of the new bikes from the bikeshare program in Chinatown, Manhattan, June 20, 2013. (Benjamin Chasteen/The Epoch Times)
New York

The announcement was made Monday by Transportation Commissioner Janette Sadik-Khan, after transit advocates and New Yorkers began posting pictures of the first docking stations being installed in northwest Brooklyn.

The docking stations are solar-powered and take several hours to install.

One of the first stations installed was a 19-dock station at Monroe Street and Classon Avenue in Bedford Stuyvesant, Brooklyn. Workers told a reader of the transit website Streetsblog that they were installing eight stations a day; at that rate it would take about five weeks to put in the first 293 docking stations.

Sadik-Khan told the Wall Street Journal that roughly half the bike stations were moved from their originally proposed locations after input from neighbors.

Citi Bike had been slated to start last summer, but was delayed because of a break-up between the two main companies involved. It was further delayed from March to May because of damage sustained from Hurricane Sandy.

Pricing for the system is meant for regular users, being $95 for an annual membership versus $9.95 for a 24-hour pass and $25 for a 7-day pass. Those who purchase the yearly membership get unlimited rides under 45 minutes, but must pay more if a ride goes over that time. Users buying daily or weekly passes get unlimited rides up to 30 minutes.

Demonstrations of the Citi Bike system will begin again on April 21, during Earth Day, at Union Square. Another will happen at the Bike New York Expo on May 3 and May 4 at Basketball City Pier 36.

The DOT hopes to eventually expand the program to include 600 stations and 10,000 bikes.