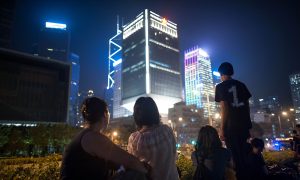 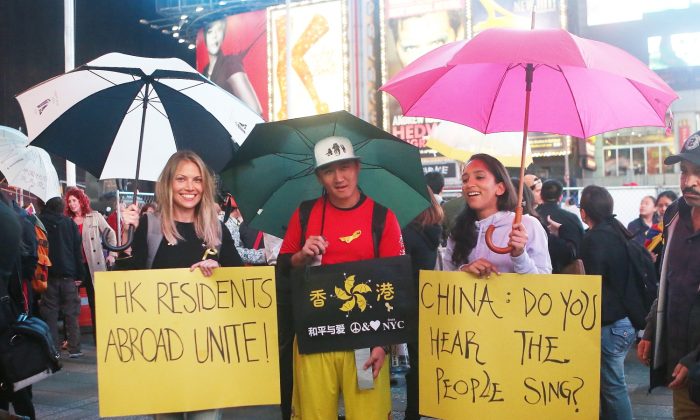 NEW YORK—Huddled under open umbrellas in the middle of Times Square, despite the day’s drizzle of rain having already concluded, several hundred people shouted in English and the Cantonese dialect of Chinese, “Hong Kong, democracy! Hong Kong, be strong!”

On Wednesday night, New Yorkers gathered in support of protesters in Hong Kong, who have occupied the city’s main thoroughfares to demand universal suffrage from the government. In an act of solidarity with the protesters, 46 cities around the world, including New York City, held events Wednesday—China’s national holiday for the founding of the People’s Republic of China.

Since Hong Kong was handed back to Chinese control in 1997 after more than 150 years of British colonization, the method by which the city’s head of government, called the chief executive, would be elected has been in debate.

Hong Kong’s Basic Law sets universal suffrage as the goal for elections for the chief executive and a decision in 2007 by the Chinese Communist Party’s rubber-stamp legislature, the National People’s Congress, set the 2017 election as the time by which universal suffrage “may” be implemented. The current method for electing the chief executive is by a special committee of 1,200, who are said to represent the more than 7 million residents.

On Aug. 31 the National People’s Congress determined that Hong Kong citizens would vote for the chief executive in 2017, but the candidates would be nominated by a committee that Beijing effectively controls.

This decision must be approved by Hong Kong’s Legislative Council to be implemented, but because of opposition from pro-democracy legislative councilors, it stands no chance of approval.

After the Aug. 31 decision, the civil disobedience movement Occupy Central for Love and Peace began planning protests calling for universal suffrage. On Sept. 22, students went on strike, and this past weekend Occupy Central joined the student protests. Suddenly tens of thousands of people were in Hong Kong’s streets.

New Yorkers on Wednesday readily embraced the symbol Hong Kong protesters have adopted to represent their cause—the umbrella, which protesters have used to protect themselves from tear gas and pepper spray that police fired onto the crowd several days earlier, as well as the occasional downpours of rain.

At around 8:30 p.m., people in the Times Square opened their umbrellas at the same time, then shouted slogans calling for the popular vote and for the current chief executive, Chun-ying Leung, to resign.

People also sang “Do You Hear The People Sing?” from the musical “Les Misérables,” and a song by the Hong Kong rock band Beyond that also contains lyrics relating to freedom.

Rally organizer and biology professor at Manhattanville College, Anna Yeung-Cheung said Wednesday’s Times Square rally was the third one she organized since the protests in Hong Kong began. She and a group of volunteers, mostly Hongkongers studying abroad, spread the word through social media and word-of-mouth.

Yeung-Cheung hopes that the government can meet with protesters for meaningful negotiations, so that the protesters can go home and return to their normal lives. “This is not a variety show, or Broadway,” she said. “I don’t want to keep doing this [organizing rallies].”

On Thursday evening in Hong Kong, Chief Executive Leung announced that he would send his chief secretary, Carrie Lam, to meet with the protesters.

Eutine Wong, 28, said she has seen the situation in her hometown deteriorate since the 1997 handover. “If things continue like this, civil rights will go down the drain,” she said, as she handed out yellow ribbons—another symbol used by Hong Kong protesters—to rally participants.

Wong, who first came to New York City in 2005, said Hong Kong’s leader should be elected by popular vote. “The leader is someone who should know what the public wants and is fully backed by the citizens,” she said.

Richard Tam, who immigrated to the United States in 1988, agreed, and said the Hong Kong government has the responsibility to convey the people’s wishes to the Chinese authorities. “It shouldn’t be certain factions or the Chinese authorities picking the candidates. If Hong Kong people can vote, and be voted into office, then Hong Kong society will improve, and become more open,” he said in Cantonese.

Vivian Au, 19, said many of her friends in Hong Kong have been protesting in the streets for days. “It’s very heartbreaking. I want to be there myself,” she said in Cantonese. She hopes to make a difference by informing people here about what’s happening in her hometown. “It’s supposed to be ‘one country, two systems,'” referring to the policy of autonomy stipulated in the handover agreement. “The mainland has encroached on our politics.”

NYC supporter of the #HongKong protests @ Times Square, sign says: I want the right to choose the chief exec pic.twitter.com/h4TUoGp1uX

A group of Tibetan New Yorkers also came out in support of Hong Kong’s democracy.

Tsering Dolkar, vice president of the Tibetan Women’s Association New York-New Jersey, said if Hong Kong people win the right to universal suffrage, it can be a big stepping stone for Tibet’s autonomy as well. “It’s Hong Kong today. It’s Tibet tomorrow,” she said. “The protests will create a huge buzz in Tibet and China,” inspiring others to also take up the fight for democracy.

Dolkar also noted that while Hongkongers and Tibetans are “up against the same government, the Chinese Communist Party,” Tibetans face China’s security forces, censorship, and restricted access for the international press.

“Even a small protest in Tibet, they will impose martial law and bring lots of police force. It shows how insecure they are of their own future and own government,” she said.