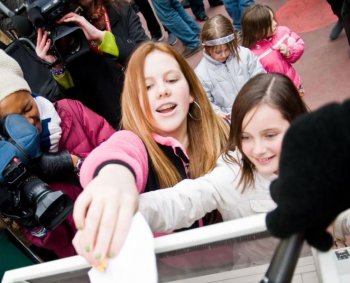 Two friends bid 'good riddance' to a falling out with a friend during the Third Annual Good Riddance Day in Duffy Square. (Aloysio Santos/The Epoch Times)
US

Stephanie Lam
View profile
Follow
biggersmaller
Print
NEW YORK—For one afternoon, Duffy Square became a place for catharsis as New Yorkers young and old let go of bad memories before the New Year. On the Third Annual Good Riddance Day, they destroyed documents, photos, and whatever remnants of 2009 they wish to be rid of. Shredders, a dumpster, and a sledgehammer were hauled in for the symbolic event, which was hosted by Times Square Alliance and Countdown Entertainment.

Special needs instructor Rama Mandel, 45, brought a satchel of cards on which she wrote words such as “fear,” "procrastination," and “resentment.” Placing the items in the shredder, she said she wants fear to turn into hope and faith, procrastination to action, and resentment to acceptance and empathy. In 2010, “I would like to go back to school; I would like to start writing a children's book,” she said.

Two young friends, Cayla McCaughan and Caroline Schuster, gave a sort of public apology to a friend. “We got into a fight with our friend and caused a lot of problems, and we got punished with detentions,” said Cayla. “We were just kind of saying goodbye to all these and hopefully we could be settled again. I felt really bad about it.” The girls wrote a three-page apology to their friend.

President of the Times Square Alliance, Tim Tompkins, shredded 25 front pages that feature Tiger Woods’ recent controversy. “I was saying good riddance to all the excessive coverage of Tiger Woods. It's like there is nothing else happening in the world,” he said.

A $250 gift card was awarded to the most creative and most despicable discarded memory of 2009. This year’s winner was Alissa Yakelevits from Los Angeles who was in town visiting her grandmother. She bid goodbye to her camp leader who just appeared on America’s Most Wanted.