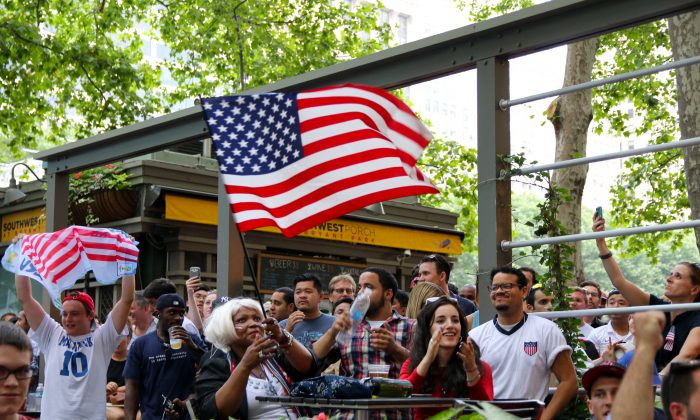 New Yorkers React to US Loss in World Cup

NEW YORK—Fans across the city lamented the knockout loss suffered by the United States at the feet of Belgium on Tuesday.

The Southwest Porch Bar and Restaurant held a viewing party for the match in Bryant Park. By the time the game had begun, the party area had already reached its carrying capacity.

The 2–1 loss wasn’t easy on some, although the team’s single goal cushioned the fall.

“It was devastating, but at least we made it interesting at the end,” John Egner, a student at Columbia University, said.

Egner also praised the performance of the U.S. team’s goalie, Tim Howard, as did many of the other viewers at Bryant Park.

“If it wasn’t for him, it would’ve been a totally different game,” said Christina Simopolis.

Although she cheered for the United States, she thought the better team won the game.

“I do really think Belgium dominated the entire game and deserved the win,” she said.

The United States team has not advanced to the quarterfinals in the World Cup since 2002, but many are hopeful about 2018.

“Things happen, we’ll be ready the next time around,” said Christian Rivas.

Heading into the game, fans were optimistic about the team’s chances. Colm Burke, 20, had come all the way from Yonkers to watch the game with his friends. Burke had a U.S. flag draped across his back.

“We got out of the group of death, which was completely unexpected, anything can happen, it’s the knockout round,” he said, minutes before the match began.

He and his friends chanted, “I believe that we will win,” and for the first 90 minutes, the crowd believed that too.

Howard, the United States goalkeeper, was able to block shot after shot, keeping the hope for a victory alive for the crowd.

“He’s totally the MVP of the U.S. soccer team,” said Jamie Comejo, who had watched the game in Bryant Park.

Howard made 16 saves during the game, the most in any World Cup game since 1966.

Some fans did air dissatisfaction, although it wasn’t directed at the soccer team.

“Bryant Park should be playing this on a projection instead of just this one bar. They’re failing America,” quipped Stephen Dabic, an epidemiologist at the Department of Health and Mental Hygiene.

Belgium dominated the field throughout the game, keeping the shots taken at a lopsided 20–3 in the 60th minute.

The United States was behind 2–0 for two minutes before 19-year-old Julian Green scored in the 107th minute.

Belgium will play Argentina in the quarterfinals on Saturday.