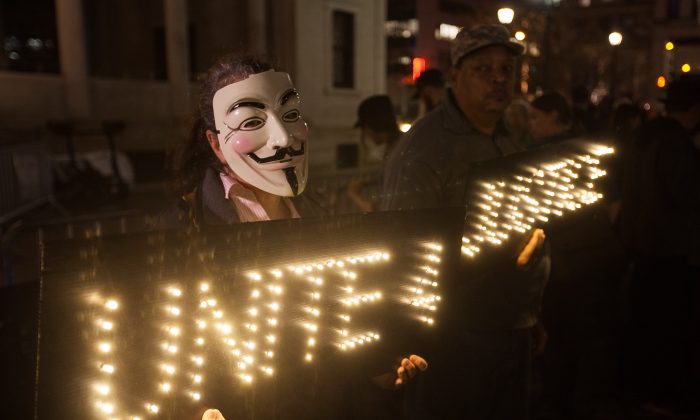 A protest against racial profiling by police on Union Square, Manhattan, NY, on Nov. 24, 2014. Dozens of protests were scheduled around the nation to coincide with Nov. 24 St. Louis Grand Jury announcement of its decision on whether to indict Darren Wilson, a police officer in Ferguson, MO, who shot dead local man Michael Brown, 18, on Aug 9. (Petr Svab/Epoch Times)
Ferguson

NEW YORK—The St. Louis, Mo., grand jury’s decision on the policeman who shot and killed 18-year-old Michael Brown was scheduled to be released at 9 p.m. Monday, Eastern time, according to official sources.

About 250 people gathered in Union Square Monday night to protest police involvement in the deaths of Brown, Eric Garner who died after an officer put him in a choke hold in Staten Island, and unarmed Akai Gurley who was recently shot in a stairwell in Brooklyn. The protest was timed to coincide with the decision announcement.

Rev. Al Sharpton was poised to give a statement at 9:15 p.m., in Harlem following the release of the decision.

Many of those at the protest were young, recent college graduates. Some were even younger.

The atmosphere was full of energy, but not belligerent.

Branker and her friend Taylor Wilson, 17, attended the rally upon receiving invitations from two student groups at The New School; Students of the African Diaspora and Feminist Collective.

Branker said, “I’m tired of this. It makes me mad, so I came here to show support as myself.”

More than a dozen police watched as protesters, cordoned off by metal barriers, shouted slogans and huddled in an enormous circle, as one person beat a drum.

Crowd at Union Square, NYC chants: “turn up, don’t turn it down. We do this for Mike Brown” #Ferguson #GrandJuryDecision

“Back off, back up, we want freedom, freedom,” they chanted. “All these racist cops, we don’t need them, need them.”

Some of the signs they held up included photos of Eric Garner and Michael Brown.

Pierce Delahunt, 26, a member of Resource Generation organization, said that about eight people from his group were at the protest. The organization champions racial justice, and gender and class equality.

“As a white male, I feel it’s important to show my solidarity, because this is often seen as a special interest issue,” he said. “It’s important for everyone to be here. This is not about lives of a certain kind, but every life.”

There are about 200 protestors in NYC’s Union Square. #MichaelBrown #Ferguson pic.twitter.com/lRJojBwYIa

If the policeman, Darren Wilson, were indicted, Branker said, “The job would be done, but not done all the way.”

Delahunt worried that if there was an indictment, there might be an “out-of-hand celebration.” Regardless of the decision, he planned to join protests on Tuesday.

Wilson said, “I’d feel like he got what he deserved. But so many people get killed all the time, I won’t feel happy until [things] like this stop happening.”

Tsige Tafeese, 24, a student at the New School who is part of the Students Against Police Brutality organization, believes the whole society is primed to think a black boy walking in an alley is dangerous. She said what happened to Michael Brown was the consequence of a white supremacist society.

Tafeese’s family migrated from Ethiopia and she is a first-generation American. She didn’t understand the racism against blacks in the United States at first. But while living in Seattle, she and her family were harassed by police. For example, after her dad parked his car in front of his own house, police tested him for drunk driving. They then called for back up, while she and her siblings were in the back seat.

Most blacks have been harassed by police, she said, “You’ll be hard-pressed to find a black person who hasn’t.”

Tafeese traveled to Ferguson, Mo., two months ago, to be in solidarity with those mourning Brown’s death. She said that going there was “the single, most powerful thing in my life.”

Those in the crowd also shouted, “NYPD, KKK, how many kids did you kill today?” and “Turn up, don’t turn down. We do this for Mike Brown.”

And if Darren Wilson is not indicted, Branker and Taylor paused for a moment, looking at each other in angry disbelief.

Branker said, “I would have to come back out here again.”

Wilson nodded, “I would get super sad. I hope that’s not what happens.”