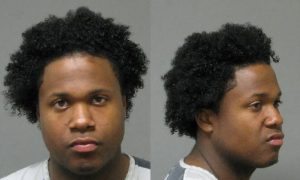 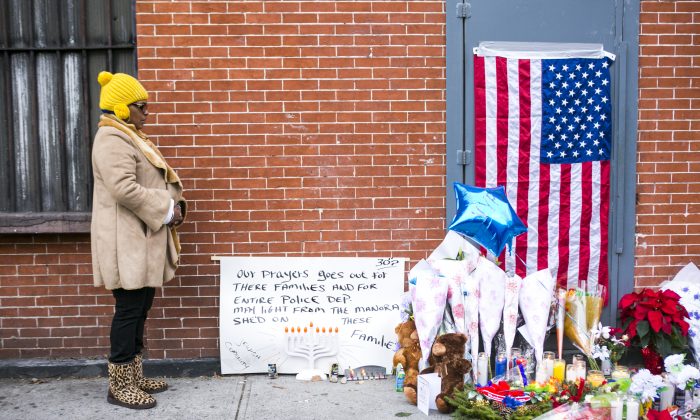 A memorial site in the Bedford-Stuyvesant neighborhood of Brooklyn, N.Y., on Dec. 21, 2014, for two local police officers, Wenjian Liu and Rafael Ramos. Liu and Ramos were shot and killed the day before while sitting inside a police car. (Samira Bouaou/Epoch Times)
New York

NEW YORK—”Why does it have to take a tragedy for the community to come together?” one woman cried out as she struggled to stifle her tears.

Others, too, couldn’t help but shed tears as they placed flowers and candles on the sidewalk near the location where two police officers were killed Saturday afternoon in the Bedford-Stuyvesant neighborhood of Brooklyn.

At around 3 p.m. Saturday, officers Wenjian Liu and Rafael Ramos were sitting in a police car outside Tompkins Ave., assigned to the area as part of NYPD’s response to a recent spike in violence at the nearby Tompkins Houses.

Ismaaiyl Brinsley, 28, from Baltimore, Md., then walked up to the car and fired his gun four times through the front passenger window, striking each officer in the head.

Brinsley fled to a nearby subway station, where he shot himself in the head, according to the police. He later died.

The killings occur at a time of strained relations between some New Yorkers and the police department, which began after a white police officer on Staten Island, Daniel Pantaleo, placed a chokehold on an unarmed black man, Eric Garner, leading to his death.

For weeks, thousands of people have demonstrated across the city, against a grand jury’s decision to not indict Pantaleo.

Brinsley, who had a troubled history of attempted suicides and estrangement from his family, posted on his social media accounts that he planned to kill police officers in retaliation for Garner’s death. He wrote: “I’m putting wings on pigs today. They take 1 of ours, let’s take 2 of theirs,” then referenced Garner and Michael Brown, a black teen in Ferguson, Mo., who was also killed by a white police officer.

Both men’s deaths have sparked a national conversation about whether policing tactics in America are too aggressive and discriminate against people of color.

On Sunday, local residents, friends, and family of the officers, and concerned New Yorkers stopped by a makeshift memorial set up near the site of the officers’ deaths to pay their respects.

A police officer who graduated from the police academy with Ramos and wished to only identify himself by his last name, Perez, said he still remembers the times he and Ramos trained at the academy and cracked jokes with each other. Ramos was “the type of guy who’d give his shirt off his back if you needed it,” Perez said.

Perez, who now patrols Brooklyn South, said the incident has made him nervous. “I don’t want to walk in the street, turn around, and there’s a gun on my back, or my face. I got a family to go to, like everybody else.”

But despite the tensions following Garner’s death, Perez said he’s committed to doing his job. “I put on my uniform every day to serve and protect this community, and I do it, no hesitation. Even if you don’t like cops, even if you do like cops, I’m still going to protect you no matter what.”

Marilyn Sleck, of Williamsburg, said her brother, a police officer, worked closely with Ramos. He has secluded himself at home since hearing about Ramos’s death. “He’s too distraught over what happened. All he keeps saying is that he was a good man,” she said.

For her brother, who patrols on Staten Island, things have gotten tense since the death of Eric Garner. “They fear for their lives every day,” Sleck said.

U.S. Secretary of Homeland Security Jeh Johnson also stopped by the memorial site briefly to pay his respects to the two officers. He traveled from his home in Montclair, N.J., to “show support for the New York Police Department” on behalf of his department.

Jose Martinez, an emergency medical worker who worked closely with Ramos in Brooklyn’s central booking office, remembers Ramos as a kind and well-mannered person. “He was just such a pleasant human being,” Martinez said. “You know him on a professional level, and then for something like this to happen, you know he has a family, it just hurts. It hurts badly.”

Local resident Chris Linares, who moved into the neighborhood about two weeks ago, is also shaken by the shooting. “That kind of impact on the community gets people thinking, what kind of people live around here? What’s going on?”

While Linares did not personally know either officer, he placed several flowers on the memorial site to remember their sacrifices. “When they put on that uniform, they’re a target. They’re a target for people’s hatred. If people get a ticket, if they run a red light, whatever resentment they have for the NYPD, they’re [the police] a target for criminals, for the bad guys,” he said.

The shooting prompted a response from not just local officials, but the president as well.

President Barack Obama condemned the shooting in a statement released late Saturday, saying, “Officers who serve and protect our communities risk their own safety for ours every single day and they deserve our respect and gratitude every single day.”

Mayor Bill de Blasio said at a press conference Saturday evening outside Woodhull Hospital, where the officers were pronounced dead, “When a police officer is murdered, it tears at the foundation of our society. It is an attack on all of us.”

On Sunday, Gov. Andrew Cuomo directed flags on all state government buildings in New York City to be flown at half-staff in honor of officers Liu and Ramos.

Cuomo said in a statement: “This deplorable act of violence is the opposite of what New York is and what New Yorkers believe in. These brave officers, along with the over 34,000 other uniformed men and women of the New York Police Department, put their lives on the line every day to keep our communities safe. They run toward danger when all of our instincts tell us to run away.”

Mayor de Blasio, Commissioner Bratton, and NYPD chief of department James O’Neill attended a mass ceremony at St. Patrick’s Cathedral in Manhattan on Sunday, where Cardinal Timothy Dolan intoned for all to pray for the fallen officers and their families.