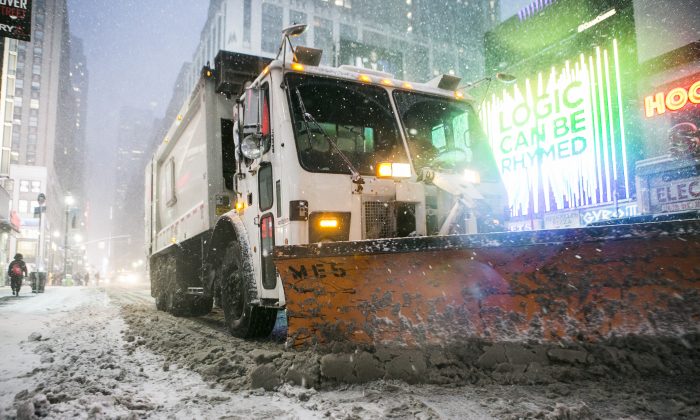 NEW YORK—Living in the Empire State comes with its perks and its pitfalls. Not everyone can afford to live in a state with one of the highest tax burdens in the country.

Civil service traditionally comes with unimpressive pay but generous health and pension benefits. The latter can be overlooked—especially for a young person far from retirement.

But lately, pension benefits have become more and more significant—first, because young civil servants are seeing fewer and fewer of them, and second, because they threaten the future of the state.

The state retirement system now pays over $10 billion in pensions every year—about the cost of two-and-a-half One World Trade Centers. And the cost is rising by about 5 percent every year.

Meanwhile, the pension funds’ investments don’t bring in enough cash, so the state has to pay the difference—which amounted to $5 billion last year. With a volatile stock market, that number is likely to grow.

History of Pensions in New York

The state of New York granted its employees pensions in 1921. After one year, 4,672 employees entered the system and 43 retirees started collecting pensions. The pension amounted to half of a salary after 35 years of service (the amount was higher if retiring later and lower if earlier).

To put enough money aside for pensions, the state established pension funds that were half-funded by the state and half-funded by money deducted from employees’ salaries. The idea of a pension fund is that the state invests the fund money into bonds and the interest from the bonds then helps to cover the payments to the retirees.

Yet, collective bargaining with unions has considerably sweetened the pension deal throughout the decades. The pension payout increased from 50 percent to 67 percent of a salary (calculated after 35 years of service). Police officers and firefighters could retire as early as after 20 years of service. And, most importantly, employees were no longer required to chip in, doubling the cost for the state compared to the 1921 system.

Starting in the 1960s, public pension funds have increasingly abandoned investments in bonds and put their money in stocks instead. New York jumped on the wagon as well.

And then the dot-com bubble burst. Between 2000 and 2003, New York state pension funds—not including teachers and New York City—lost over $30 billion, some 25 percent of its assets.

In the following years, the funds rebounded strongly, only to take another hit in the financial crisis of 2008. Some $45 billion—close to 30 percent—disappeared.

The market has been moody ever since. After a few successful years, the funds posted earlier this year the worst return on investment since 2009—a mere 0.19 percent.

Yet, while the income is uncertain, the state has an even bigger problem on the expense side.

As salaries kept increasing, public workers have been retiring with pensions much higher than in previous generations.

Public servants—excluding teachers, police officers, and firefighters—retiring in 2015 after 30 to 34 years of service collected an average pension of about $45,000.

Police officers and firefighters retiring under the same circumstances received an average pension of about $94,000.

The generous pensions for police officers in many New York localities may come as a surprise—even to other officers. The NYPD, for example, has its own retirement system. It provides solid pension benefits, yet these are nowhere near those received by many of their colleagues upstate and on Long Island.

Such generous pensions can arise from officers taking advantage of the system to push their pensions higher.

The game goes as follows: The officer, several years before retiring, signs up for an increasing amount of overtime work. Overtime pays 50 percent more, which can markedly hike the officer’s salary for the year—often past $150,000, or even $200,000. The state, then, calculates the pension based on the inflated salary.

Earlier this year, Degnan broached the topic at a meeting of the Committee on Operations.

“There is a pervasive perception out there, I believe, that the overtime system is abused among the Port Authority,” he said at the July 21 meeting. “When you see 20 employees making more money than our executive director does—most of them, I have to say, come from the police department—we need to study this a little better.”

Degnan exaggerated, but not by much. Six of the 10 highest paid Port Authority employees in 2015 were police officers. All earned close to, or more than, $300,000. Two of them earned more than the executive director.

Degnan posited that the Port Authority may leave the state pension system altogether.

“It’s something that we want to formally undertake a study of and ascertain whether there are less expensive, but fair to the employee, options for the retirement system,” he said.

The State Constitution says pensions “shall not be diminished or impaired,” which means the state can’t reduce them. It can only bargain with unions to lower the benefits for new employees, as it did in 2010 and again in 2012.

New employees are now signing up for lower pensions while also contributing 3 to 6 percent of their salary to the pension funds.

“Depending on how long they remain employed, these new hires will receive pensions that are only 10 to 60 percent as large as the pensions received by their counterparts hired four decades ago,” stated a June 2016 report by the Urban Institute, a liberal-leaning think tank.

Yet more than 70 percent of current employees will retire under the old rules, pushing any current savings decades into the future.

New Yorkers are thus stuck paying the bill for benefits they likely won’t see, even if they join the public service.