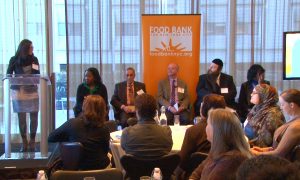 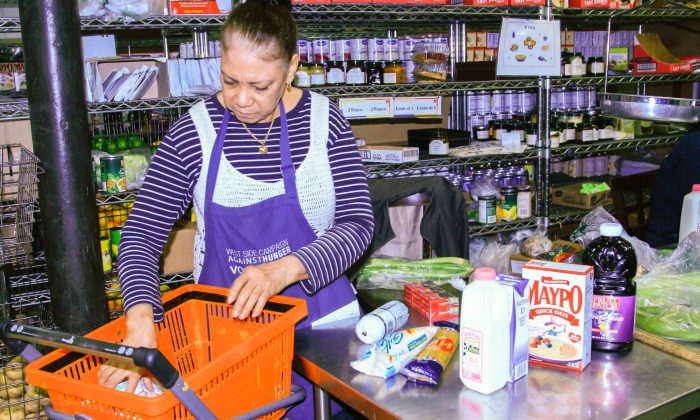 A cashier looks over groceries at West Side Campaign Against Hunger food bank in the Upper West Side on Monday, Sept. 18, 2014. (Shannon Liao/Epoch Times)
New York

NEW YORK—When the recession hit in 2007, the most disadvantaged New Yorkers started losing meals. There were nearly 1,000 food pantries and soup kitchens in the city at the time, and those services started to struggle.

The remaining programs tried to fill the gap, and found no relief, according to a new report. In 2013, Supplemental Nutrition Assistance program (SNAP, formerly known as food stamps) benefits were cut and food panties and soup kitchens reported an almost immediate increase in visitors that November. Benefits were further cut the following January.

According to a new report Food Bank for New York City released Monday, since the cuts went into effect New Yorkers have had a 56 million meal gap.

Over 1.4 million New Yorkers—about a fifth of the city—rely on SNAP benefits, including almost half a million children. And according to the report, very single neighborhood is affected.

Hunger is a multi-layered issue.

And organizations like the Food Bank for New York City provide more than just food; they also help eligible people with paperwork so they can receive benefits they did not know how to access before and run nutrition education programs.

With the increased pressure from SNAP cuts, food pantries and kitchens are being overwhelmed.

Food Bank for New York City collected surveys from 260 food pantries and kitchens, and 80 percent saw an increase in visitors. About 60 percent are running out of food, compared to 48 percent in November 2013. And 61 percent had to reduce the amount of food in their packages, compared to 23 percent a year ago.

“Running out of food is the new normal,” said Margarette Purvis, president of Food Bank for New York City. “That’s just not acceptable.”

The report includes a map showing where organizations do not have the means to provide meals to those in need by community district, but even the lowest need areas have gaps of over a million meals.

“It’s a shared mission,” Purvis said at Food Bank for New York City’s annual Legislative Breakfast held at the Roosevelt House Public Policy Institute at Hunger College in Manhattan. “No matter how many pounds of food the food bank trucks throw at hunger, that’s just not it. You cannot do this work alone.”

A thousand charities and schools are part of the Food Bank for New York City’s food network, “but we need it to be bigger,” Purvis said. “We need to see hunger differently.”

Hundreds of charities are already working together, but there needs to be more effort on engaging the general public, the donors, and friends of organizations, Purvis says. About 70 percent of the charities in the network are completely run on volunteer efforts.

“We’re putting together charities … hundreds of charities are already working together, they’re already seeing major results,” Purvis said. “The focus has got to be on who is still in these doggone lines, and how to get them off the lines and into the grocery stores.”