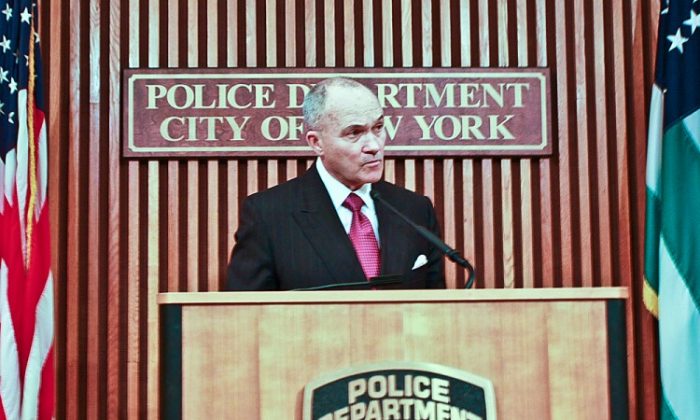 NEW YORK—City Council and the NYPD on Tuesday launched a citywide awareness campaign in the fight against domestic violence. At One Police Plaza, Speaker Christine Quinn, Police Commissioner Raymond Kelly, and other councilors announced this joint effort.

Key elements of the campaign are colorful ads with the slogan “Don’t Mind Your Own Business.” The posters will be displayed on bus shelters, phone kiosks, and newsstands in English, Russian, and Spanish all over the city.

The campaign’s goal is to encourage citizens to become more proactive in reporting to the police cases of domestic violence they witness, so that perpetrators can be more successfully prosecuted and victims saved from more abuse or even death.

While the New York Police Department has increased its response to incidents, from more than 600 a day in 2008 to more than 700 a day in 2011, it is estimated that a large number still goes unreported.

Yolanda Jimenez, commissioner of the Mayor’s Office to Combat Domestic Violence reminded everyone that in cases of domestic violence it is often neighbors, friends, or family members who knew about the abuse, or are even suspects.

“Violence from someone you love and may rely on for support makes it that much harder to report abuse,” Speaker Quinn explained.

But often it is not only victims, but also witnesses who stay quiet. For Kelly, the key problem is that silence is “an accomplice” to domestic violence.

Therefore, Quinn calls on all New Yorkers to do “what they do best,” speak out when they see something and call 911.

This program should come at no extra cost for the city’s budget, according to George Fertitta, CEO of NYC & Company, which developed and is carrying out the campaign.

Rona Solomon, deputy director of the Center against Domestic Violence, based in Brooklyn, appreciates that the program gives New Yorkers “tools to speak up.” This is crucial since domestic violence truly impacts everyone’s quality life, not just the victims.

However, Solomon points out that raising awareness is not enough. While she generally lauds the proactive role of the City Council, she bemoans the uncertainty of funding for many of the services her center offers to victims of domestic violence. She calls it foolish for the city to cut preventive services since in her opinion these are the most cost-effective way to deal with the problem.

A 2011 U.S. Senate report showed that nationally one in four American women will experience violence in their lifetimes, while domestic violence impacts 15.5 million children annually.