Cuomo announces all New Yorkers can vote absentee in June primaries, as other states delay elections 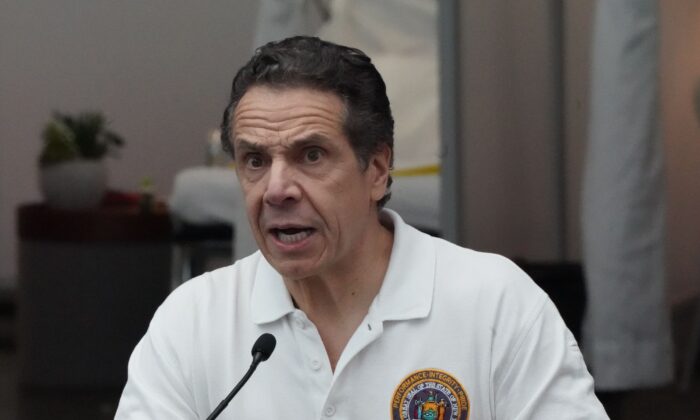 New York Gov. Andrew Cuomo announced on April 8 that New Yorkers would be allowed to cast absentee ballots in the June primaries. Other states said they would delay elections in response to the CCP virus pandemic.

An executive order to allow home votes would be issued imminently, said Melissa DeRosa, a top aide to Cuomo. It would allow absentee ballots to be cast for the state’s primary on June 23.

#BREAKING: All New Yorkers will be able to vote absentee on the June 23rd primaries.

New Yorkers shouldn’t have to choose between their health and their civic duty.

”All New Yorkers will be able to vote absentee on the June 23rd primaries.” Cuomo wrote on Twitter Wednesday. “New Yorkers shouldn’t have to choose between their health and their civic duty.”

DeRosa said the decision to allow New Yorkers to cast absentee ballots was made as the risk of contracting COVID-19, the disease caused by the CCP (Chinese Communist Party) virus, commonly known as the novel coronavirus, qualifies for the measure under the New York State Constitution.

“We are saying absentee voting is an option. There is a temporary illness provision, it will include the risk of contracting COVID-19,” Cuomo told reporters at a briefing in Albany on Wednesday. “And I think we will take a wait and see approach as we get closer, on whether or not polls should be open.”

Cuomo said he was concerned about the risk to public health if people were to queue up to vote in-person at polling stations.

“On voting, I’ve seen lines of people on television voting in other states. This is totally nonsensical,” Cuomo said. “God bless them for having such diligence for their civil duty that they would go stand on a line to vote. But people shouldn’t have to make that choice.”

The state’s primary was previously scheduled for April 28 but was postponed due to the COVID-19 outbreak.

At least a dozen other states across the United States have postponed their primaries because of the CCP virus, including New Jersey state, which announced the rescheduling of its contest this week.

New Jersey Gov. Phil Murphy announced Wednesday the state is postponing its primary to July 7 from June 2, citing concerns over the CCP virus outbreak. The state is one of the most severely impacted, with more than 1,500 deaths.

“First, we want to preserve the possibility that improvements in the public health situation will allow for in-person voting, and delaying the primary by five weeks increases the likelihood of that,” Murphy said. “If, failing that, we eventually have to make the move to a statewide all vote-by-mail election … we have to make sure our systems are able to handle that.”

“Republicans should fight very hard when it comes to statewide mail-in voting. Democrats are clamoring for it,” Trump tweeted Wednesday.“Tremendous potential for voter fraud, and for whatever reason, doesn’t work out well for Republicans.”

He said mail-in voting usually does not “work out well for Republicans.”