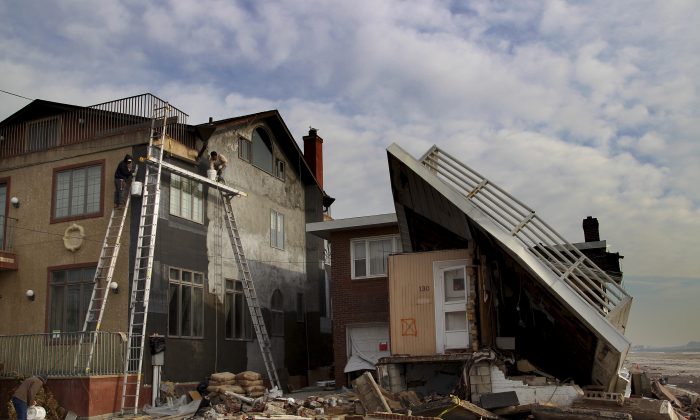 Men repair a home damaged by Superstorm Sandy next to a one that is almost collapsed on the Rockaway Peninsula in New York, Thursday, Nov. 29, 2012. Sandy damaged or destroyed 305,000 housing units in New York. (Seth Wenig/AP Photo)
New York

Some 9,000 Hurricane Sandy victims are getting a bit of a shock in the mail eight months after evacuating their homes.

Residents have started to receive water bills from the New York City Department of Environmental Protection (DEP), the first since Hurricane Sandy. Billing had been suspended to give residents an opportunity to rebuild and repair their homes. The first bills were received around June 17.

Customers must pay DEP’s minimum charge of $1.19 per day for the daily base cost of connecting to the city’s water/sewer main line. Some bills might also include charges for water usage from August through October 2012.

Even those who have used little or no water during the extended suspension period are getting bills. This includes residents of buildings tagged yellow after Sandy, meaning part of the homes were deemed uninhabitable. Building tagged red, or uninhabitable, have been exempted from billing.

Estimated bills were not sent to customers in the past eight months, so now customers are getting one big bill that is about $200–$300.

“We didn’t want to send people who were in a tough spot an estimated bill,” said Chris Gilibrand, DEP Communications Director.

Congressman Michael Grimm (R-S.I./Brooklyn) has been advocating for the city to forgive bills for Sandy survivors who have used little or no water since the storm struck.

Rep. Grimm is holding a press conference on Staten Island on Saturday, June 22, at 10:30 a.m., in one of the homes of his constituents, Stephanie Argento, who received a bill for more than $300.