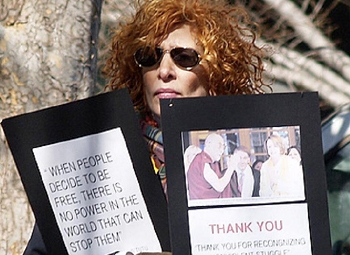 Daubed with fake blood and draped in the Tibetan flag, she and the others laid down on the searing hot pavement in Tiananmen Square to represent the deaths of over a million Tibetans at the hands of the Chinese Communist Party since they have occupied the country.

What happened afterwards became one of her proudest moments.

The protesters are members of Students for a Free Tibet—Gatterdam, Chris Schwartz from Montreal, Canada; Evan Silverman and Joan Roney from New York; and David Demes from Germany.

To Gatterdam’s surprise, the group stayed motionless on the ground for five to eight minutes. “I thought we were going to be pulled up right away,” she said. They had bitten down on blood capsules and wrapped themselves in the Tibetan flag. Soon, undercover police, who regularly patrol the Square, showed up and escorted them away.

“They saw the blood coming out,” Gatterdam said. “When you look at the video, people looked stunned. I’m not exactly sure they knew what to do with us."

What they did was march the protestors through the Square to the exit, essentially putting them on display. “We walked out of the square and still paraded all around on the outside of the square for over 15 minutes,” Gatterdam said. “It was great because the crowd grew behind us as we were chanting.”

They were taken behind a gate. The undercover cops called an ambulance, thinking that the bloodied tourists were hurt. When the protestors made clear their intention, the police took them into small guard shacks and questioned them for eight hours, at one point separating out the Americans.

The first thing they asked was “Do you realize you committed a grave crime against the Chinese government? This crime is punishable. Do you understand that?” according to Gatterdam.

Their question over and over again was about the Tibetan flag—“Where did you get that flag, do you know what that flag means, what colors are in that flag, how did you bring that flag in—clearly that flag is an intimidation factor to them,” Gatterdam recalled. “I believe that flag in that square says everything.”

To her, the freedom of the Tibetan people and freedom for the Chinese people are equally as important. “I think that one cannot happen without the other,” Gatterdam said. “The Chinese government is wooing both. Sure, the quality of living for some people has improved, but I really do not think that capitalism without democracy means a whole lot.”

After hours of interrogation, the police eventually told the protesters that they could spend 16 days in jail, but because of the Olympics, they would be released that night.

The police made them buy their own plane tickets home. After having visited China nearly ten times, Gatterdam’s visa was canceled.

But she thinks it’s worth it. “What I am proud of was that for 15 minutes we were able to get that Tibetan message out to the people,” Gatterdam said. “I am also proud that we were able to do something in Tiananmen Square with all that history that the Chinese don’t normally get to see. And hopefully it made a small impression on the Chinese people to say: yes you should be able to speak up. It is your god-given right to speak up for yourself and anyone you see who is oppressed.”