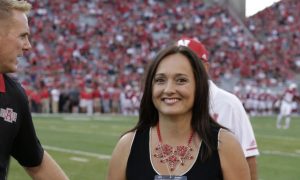 A New York youth football coach was shot dead while attempting to break up a fight in Buffalo over the weekend, according to reports.

Norzell Aldridge, 36, was fatally shot just after 7 p.m. on Aug. 31 after he intervened in a fight that broke out after his football team’s game came to an end, reported news outlet WIVB.

According to the report, a source said he was trying to protect young people when he was fatally shot in the chest near Emerson Park. He was rushed to a nearby hospital but sadly passed away from his injuries.

A source told WKBW that the Beast Elite Ducks football coach tried to break up a fight between two groups of men.

BPD announce that the victim in yesterday’s fatal shooting at Koons and Sycamore was 36 year old Norzell Aldridge of Cheektowaga. Anyone with information is asked to call or text the confidential tip line at 847-2255.

“BPD announce that the victim in yesterday’s fatal shooting at Koons and Sycamore was 36-year-old Norzell Aldridge of Cheektowaga,” the Buffalo Police Department confirmed on Twitter Sept. 2.

Another Buffalo man, 20, who has not been identified, was also injured in the shooting but has since been released from hospital.

Aldridge’s team had just completed the first game of the season, reported WIVB.

Local police were in the area at the time of the incident, but were unable to locate the suspect due to the chaos which ensued after the shooting, said Buffalo Police Captain Jeff Rinaldo.

“Buffalo Police has a detail set up at those football games, and our detail was there and at the event when this occurred,” Rinaldo said.

Rinaldo added that officers are usually stationed nearby football games because of a history of gang members attending some matches, reported WKBW.

“Our officers did hear the shots when they were fired. They did run in the direction of the shots, but in the ensuing chaos they were unable to locate a suspect at that time.”

Buffalo Common Council President Darius Pridgen told WIVB he had been contacted by many people in the community who reached out to say how much the coach helped young boys in the area.

“He was one that a lot of parents would really depend on, especially single moms, to really help with their boys,” Pridgen said.

He told WKBW: “He had dedicated this portion of his life to young people. Parents called me who said that when their kids get into trouble he was one of the ones to go to.”

Aldridge’s youth football team dedicated a post to their coach on Facebook, which reads, “Please Keep Our Duck Family In Your Prayers As We Are Going Through A Difficult Time Suffering A Lost Of Coach Nore Also Know As A HERO !”

The Buffalo Police Department has asked anyone with information to text or call the confidential tip line at 716-847-2255.