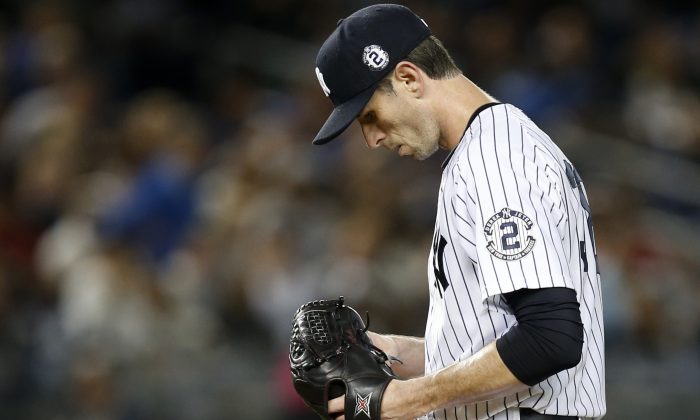 It has been a while now, and fans of the New York Yankees still cannot get used to it. What once was an annual ritual—postseason baseball—at the very least has turned into the one time refrain of the old Brooklyn Dodgers: “Wait ’til Next Year.

No matter. There are still some bracing memorable moments to remember.

Whenever the month of September comes around, thoughts turn to BUCKY DENT’S HOME RUN—October 2, 1978—and THE BOSTON MASSACRE—September 7, 1978. But there have been other marker moments that linger in memory. Herewith, a few . . .

A  stylish right-hander, one of the first major leaguers to wear eyeglasses on the field, Jones had his ups and downs. Like most pitchers of his time, he relieved and started. His eight saves in 1922 were tops in the league.. In 1923, he won 21 games, but lost a league-high 21 in 1925 as the Yanks dropped to seventh place.

Jones won 67 games as a Yankee in five seasons. No game was more dramatic for him than his September 4, 1923 no-hitter, a 2–0 gem against the Athletics. It capped his career year, a time he was the Yankee ace, hurling New York to its first World Championship.

The Yankees traded for him on December 6, 1992. He was born without a right hand, but he persevered, more than persevered. A graduate of the University of Michigan, Jim Abbott carried the United States flag during the opening ceremonies at the 1987 Pan American Games in Indianapolis and pitched for the 1988 U.S. Olympic team.

In 1989, he went directly from the University of Michigan to the Angels’ starting rotation.  A solidly built southpaw, the intense Abbott won a dozen games and posted a 3.92 ERA in his rookie season. On the mound, he wore a right-hander’s fielder’s glove over the stump at the end of his right arm. After delivering a pitch and when completing his follow-through, he adroitly switched the glove to his left hand to be in a position to handle any balls batted back to him.

In 1991 he looked like one of the best young left-handers in the game after winning 18 games for the Angels while posting a 2.89 ERA. The Yankees traded their best prospect first baseman J.T. Snow and pitchers Russ Spring and Jerry Nielsen to California for Abbott. The media spotlight in New York City seemed to be on him daily. Abbott said he wanted to be like Nolan Ryan and not like Pete Gray, the one handed pitcher.

With the Yankees, Abbott had his ups and downs in two seasons in the Bronx. His record was 20–22. But he did have one especially shining moment. It came just six days after he had been touched for ten hits and seven runs in only three and a third innings against Cleveland.

Facing Cleveland again, in the in the heat of the pennant race, Abbott tossed a 4–0 no-hitter against the Indians. “I remember it was a cloudy day. A day game, the kind of game I like to throw.”

The day was drizzly and cold. The Yankees played against the Orioles for 15 innings, and the game was called finally because of rain. There were 55,351 fans around at the start and much less at the finish.

Many in the crowd had come out to see Cal Ripken, Jr. in his  126th game at Yankee Stadium, the most by an opposing player. His first game there was June 18, 1982.

There was an orange No. 8 painted on third base, as well as the Orioles’ on-deck circle. Ripken was given the honor of throwing out the first pitch to Derek Jeter. Gifts presented to Ripken included a sterling silver press pin from Don Mattingly, a watch, an enlarged and framed copy of the commemorative ticket each fan was given reading “Farewell Cal Ripken.” Black-and-white pictures of Ripken and Gehrig were on the tickets.

Ripken’s pregame speech near home plate was staged near where Lou Gehrig, dying, said goodbye. “I know there will be many things that I’ll miss about baseball, but coming to New York and playing in Yankee Stadium will always be at the top….

“I remember Graig Nettles making diving catches. I remember Louisiana Lightning I didn’t like facing him that much. . . Willie Randolph and Dave Winfield. One of my all-time favorites at first base, Don Mattingly. It’s really been a great run,” Ripken said. “Let’s get to the game.”

The game was in Ripken’s words: “Eerie. The weather, the gray sky, the wind, the rain.  I was punched out four times and went 0-for-7, but I still had a lot of fun competing.”

Harvey Frommer is in his 39th year of writing books. A noted oral historian and sports journalist, the author of 42 sports books including the classics: best-selling “New York City Baseball, 1947-1957″ and best-selling “Shoeless Joe and Ragtime Baseball,” his acclaimed Remembering Yankee Stadium was published in 2008 and best-selling Remembering Fenway Park was published to acclaim in 2011. The prolific Frommer is at work on WHEN IT WAS JUST A GAME, AN ORAL HISTORY OF SUPER BOWL ONE (2015).