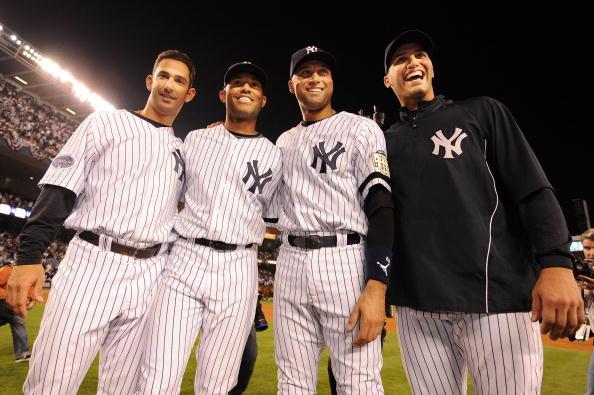 Never before in baseball have there been four players that spent nearly their entire career together on one team. They were drafted and progressed through the organization at the same time as well.

Individually, these players have made their own impacts with some outstanding achievements.

In the 22nd round of the 1990 Major League Baseball draft, Andrew Eugene Pettitte was selected. Andy Pettitte holds the Yankees franchise record for strikeouts. In 2001, Andy Pettitte was named Most Valuable Player of the American League Championship Series by going 2-0 with a 2.51 ERA. The two wins were the first and last game of the series with the Seattle Mariners. In 2009, Pettitte became the first pitcher to start and win all the series-clinching games in one postseason. Andy Pettitte has 19 wins in the postseason, an all-time high.

In the 24th round of the 1990 Major League Baseball draft, Jorge Posada was selected. Jorge Posada ranks among the best of the New York Yankees catchers. He is first all-time in doubles (379), walks (936), second all-time in home runs (275) and extra base hits (664). He also played in the most postseason games as a catcher in history.

Mariano Rivera was signed as an international free agent in 1990. Originally a starter, Rivera accidentally found “a gift from God” when he discovered the infamous cutter. He would become a setup reliever for then closer John Wetteland  in 1996 before the title was passed on. 652 saves and counting, Mariano Rivera may go down as the greatest of all-time at his position. Rivera is amazing in the regular season; he finds a level beyond that in the postseason. In the postseason, Mariano Rivera has 42 saves and an amazing 0.71 ERA, both the all-time best.

With the sixth overall pick in the first round of the 1992 Major League Baseball draft, the Yankees selected Derek Sanderson Jeter. In his first full season in 1996, Derek Jeter would go on to win Rookie of the Year, hitting to a .314 average. In 2000, he was the All-Star Game Most Valuable Player and in the 2000 World Series, against the New York Mets, Derek Jeter hit .409 with nine hits and two home runs to become the World Series Most Valuable Player as well. He is the first player to accomplish such a feat. In 2009, Derek Jeter became the Yankees all-time hits leader with his 2,722nd hit, surpassing Lou Gehrig. He also became the first Yankee to reach 3,000 hits. He achieved it with a home run in a five-for-five game. With 3,316 hits and counting (I hope), Derek Jeter is the all-time hits leader in the New York Yankees franchise.

Andy Pettitte, starting pitcher, and Mariano Rivera, closing pitcher, have combined for the most wins-saves combination. They have achieved this combination 72 times. The other admirable qualities of these four players are that they are not only dedicated professionals with fiery passion for the game of baseball; they have all composed themselves with class and grace that is admirable and respectable. Pettitte and Posada are known for their visibly energetic personalities on the field, letting the world know when they like what they see or do. Derek Jeter, the captain, composes himself with a passive grace that makes him a role model for many and respected by all. Mariano Rivera’s calm demeanor put all at ease and his unnecessarily nice gestures show that his humble beginnings made him an appreciative human being of all those around him, for a minute or a lifetime. While only one dons the title of “captain,” it is as if they all had the characteristics that made them captains in their own respective ways.

When the 2014 season begins, it is safe to assume that Derek Jeter will be the last member of this group to be wearing pinstripes. All three of his historic teammates will have retired and it will be a first for the Yankees shortstop. It will be the first time he will play a game where none of his brother-like teammates will be on the roster with him.

Four players signed with one team, debuted with one team and spent almost their entire careers together is not a common occurrence. With the creation of free agency, it is rare for a set of players to come up together with one team and stay together for as long as the Core Four has. Many believe that this will never be achieved again. The fact that the Core Four were as successful as they are is even more astounding. For those that witnessed it, appreciate seeing something that may never be seen again. For those that didn’t get the honor of witnessing it, ask those who have because it is truly a treasure to see a successful group of talent wear the same uniform for as long as they have.

Ryan Nakada
Follow
Yankees fan for most of my life. Has always had a love for baseball, whether it be playing it, watching it, reading about it, or writing about it. Tweet me: @adakannayr