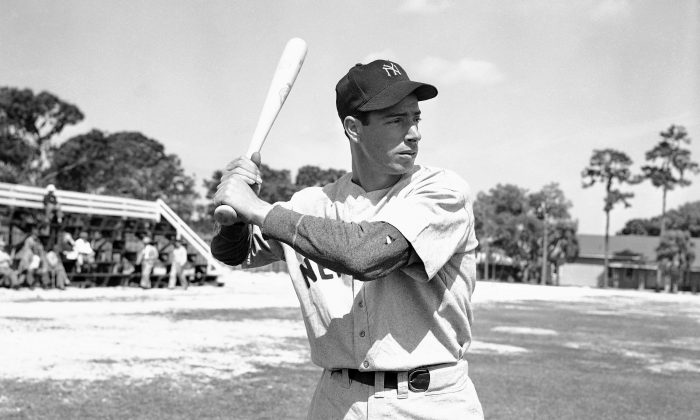 Joe DiMaggio with bat ready at first days workout on March 6, 1946 in Bradenton, Florida after returning from Panama. DiMaggio has been out since 1942 for with U.S. Army service. (AP Photo/PS)
12- OBSOLETE

New York Yankees by the Numbers: 6–10

Reactions to Numbers 1–5 were wonderful.

All kinds of incredible “numbers” have been put up by those who have worn pinstripes through the many decades the team from the Bronx has been playing baseball. Some of these numbers spark memories, controversy, wonder. Enjoy. Send along your own suggestions.

Second baseman Joe Gordon, who played mostly in the 1940s, wore No. 6. He was inducted posthumously into Cooperstown in 2009.

Number of times Billy Martin had a tour of duty as manager.

Don Mattingly hits a grand slam off Boston’s Bruce Hurst at Yankee Stadium on September 29, 1987, setting a Major-League record with six grand slams in a season.

The 1939 Yankees led by 24-year-old Joe DiMaggio averaged an amazing 6.4 runs per game as a team.

Hall of Fame manager Leo Durocher, an infielder in 1929, was the first Yankee to wear No. 7.

Bob Costas was seven years old when he went to the Stadium for the first time. He saw the Yankees play the Orioles. He visited the monuments to Ruth and Gehrig in centerfield. He claimed he cried, thinking old Yankee greats were buried there.

Only number to be retired twice by the same team is Number 8 of the Yankees. It was retired in 1972 for catchers Bill Dickey and Yogi Berra. Berra took number 8 in 1948 after Dickey retired but before he was a coach.

The 1990 Yankees had but one starting pitcher who won more than seven games, nine-game winner Tim Leary; he also lost 19.

Graig Nettles was the last Yankee to wear No. 9 before it was retired.

Of Babe Ruth’s 714 career home runs, 10 were inside-the-parkers. Ruth hit 10 career home runs off the great Walter Johnson. No other player hit more than 5 the star hurler in his 21-year career.

The record number of pinch hitters on September 6, 1954 Yankees used in doubleheader against the Boston Red Sox.

Casey Stengel managed in a record 10 World Series, winning 7 of them.

The Yanks used a record 10 pinch hitters on September 6, 1954 in a doubleheader against the Boston Red Sox. They won the opener 6–5, and the BoSox took the second game, 8–7.

Yogi Berra leads all with 10 World Series rings. Joe DiMaggio was second with 9.

Alex Rodriguez in 2007 became the first player in major league history with 10 straight seasons of at least 35 homers, 100 RBIs and 100 runs scored.

Dr. Harvey Frommer, a professor at Dartmouth College in the MALS program, is in his 40th year of writing books. A noted oral historian and sports journalist, he is the author of 42 sports books including the classics: best-selling “New York City Baseball, 1947-1957″ and best-selling Shoeless Joe and Ragtime Baseball, as well as his acclaimed Remembering Yankee Stadium and best-selling Remembering Fenway Park. His highly praised When It Was Just a Game: Remembering the First Super Bowl was published last fall.

His Frommer Baseball Classic – Remembering Yankee Stadium (Second Edition) is his newest sports effort. Autographed copies at the ready of this and his other books. https://rowman.com/ISBN/9781630761554/Remembering-Yankee-Stadium-Second-Edition