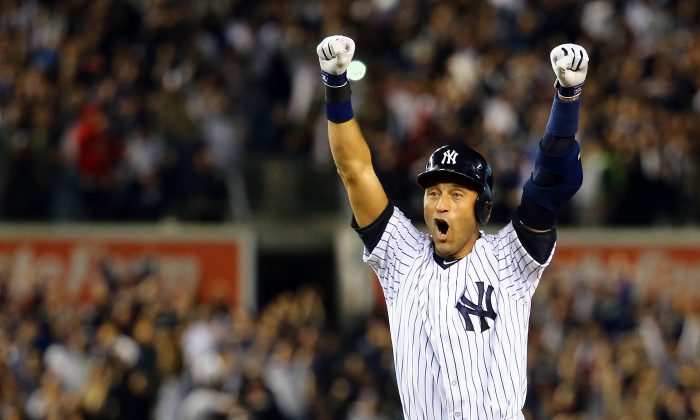 All kinds of amazing, unusual, milestone numbers have been put up by the Yankees of New York. Some of the numbers spark memories, others controversy, others surprise. Herewith for you reading pleasure the newest edition. Enjoy—and pass on other numbers to your loyal scribe.

Record set for most RBI’s in consecutive games, Babe Ruth 1931.

Most walks in one inning, the third, Yankees versus Senators, September 11, 1949.

“I could have had a lifetime .600 average, but I would have had to hit them singles. The people were paying to see me hit home runs.” Babe Ruth

The number of ballparks Babe Ruth hit at least one home run in.

The number of times Babe Ruth led the American League in homers.

New York Yankees by the Numbers: 6–10

Home plate was moved 13 feet forward in 1924, eliminating the “bloody angle” in the right field corner of Yankee Stadium.

Number of seasons Joe DiMaggio played for the Yankees.

“This is a great honor. Captain of the Yankees is not a title that is thrown around lightly. It is a huge responsibility and one that I take very seriously. I thank Mr. Steinbrenner for having such confidence in me.” – Derek Jeter

The number of players the Yankees lost in the 1918 season to military service.

Team record for runs scored in an inning: fifth inning against Washington, July 6, 1920.

Yogi Berra stayed away from Yankee Stadium for 14 years after George Steinbrenner fired him through an emissary 16 games into the 1985.

14 percent—In 1927, Babe Ruth blasted 14 percent of all the home runs recorded in the American League.

New York Yankees by the Numbers 1–5

Babe Ruth three times homered 15 times in one month; DiMaggio and Maris accomplished that feat once.

The number of consecutive seasons Yogi Berra was a member of the American League All Star team. He actually made 18 teams in all.

$15.00—Bob Sheppard’s per game earning in 1951 when he began working for the Yankees, allowing for inflation this is approximately $138 in today’s dollars.