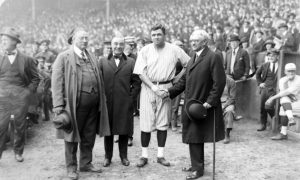 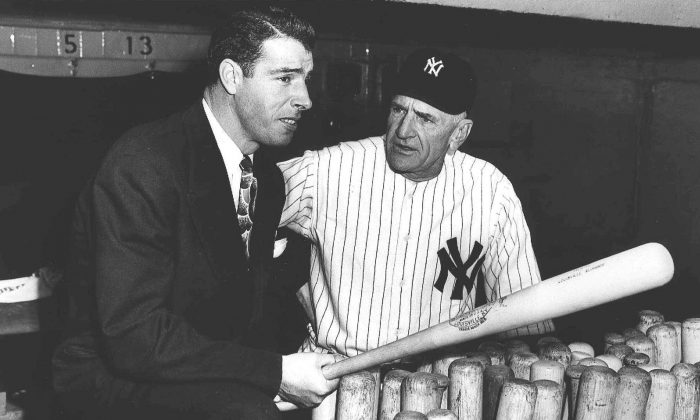 New York Yankees by the Numbers 1–5

All kinds of incredible “numbers” have been put up by those who have worn pinstripes through the many decades the team from the Bronx has been playing baseball. Some of these number spark memories, controversy, wonder. Herewith, just a starter list, enjoy. Send along your own suggestions.

Number of days Dave Winfield spent in minor-league baseball before reaching the majors.

After Allie Reynolds pitched his second no-hitter for the Yankees in 1951, the Hotel Edison where he along with some teammates lived, changed his room number from 2019 to 0002.

Difference between the batting average of George “Snuffy” Stirnweiss: .30854 and White Sox Tony Cuccinello: .30845 in the closest batting race in major league history, 1945.

Joe DiMaggio was the only player to get at least one hit in All-Star Games at Yankee Stadium, the Polo Grounds and Ebbets Field.

During Joe DiMaggio’s record 56-game hit streak, he had just one hit in 34 of those games.
Mickey Mantle hit for the cycle only 1 time in his career. He did it against Chicago at Yankee Stadium in 1957.

The major league rule banning a sticky substance such as pine tar on a bat beyond 18 inches from the bottom. That rule led to the “pine tar affair,” Yankees against Royals in 1983.

Uniform number worn by opera star Robert Merrill, the man who for many years sang the national anthem at Yankee Stadium.

Alex Rodriguez homered twice in the seventh inning at Yankee Stadium on September 5, 2007 against the Mariners giving him 48 home runs for the season.

Fewest shutouts by a Yankee pitching staff in a season, 1994.

All three perfect games in Yankee Stadium history were seen by Joe Torre: Larsen’s beauty as a 16-year-old fan, and the gems spun by David Wells and David Cone from the dugout as Yankee manager. Don Zimmer was Torre’s bench coach for the last two and he played in the first one as a member of the Brooklyn Dodgers in 1956.  The Yankees have the most perfect games pitched by one club, all at Yankee Stadium.

Babe Ruth’s uniform number, retired June 13, 1948, second Yankee number. While the great Yankee was the first to wear it, he was far from the last. Seven other Yankees wore No. 3. Outfielder Cliif Mapes wore it in 1948 when it was retired. Mapes switched to No. 7 the next year. After he was traded to the Browns in mid-1951, No. 7 went to a rookie named Mickey Mantle.

Shortstop Joe Sewell struck out only three times in 503 at-bats in 1932.

Babe Ruth and Bob Meusel are the only players in history to hit for the cycle three times.

The Yankee Clipper is the only player to win a ring for winning the World Series in each of his first four seasons, 1936-1939.

Lou Gehrig’s number, retired on July 4, 1939, the first athlete in any sport to have that distinction. He is the only Yankee to have worn number 4.

Lou Gehrig’s career RBIs for at bats, second to only Babe Ruth.

Lefty Gomez was a starter in five All-Star Games (he won 3 of them).

Number of times Mickey Mantle hit a ball into the gothic iron facade that hung from the old stadium’s roof.

October 16th, 2003 Aaron Boone was the fifth player—and second Yankee—to end a post-season series with a walk-off home run. His solo shot in the bottom of the 11th inning capped a 6–5, Game 7 victory over Boston, giving the Yankees their 39th American League Pennant.

His Frommer Baseball Classic – Remembering Yankee Stadium (Second Edition) is his newest sports effort. Autographed copies at the ready of this and his other books.. https://rowman.com/ISBN/9781630761554/Remembering-Yankee-Stadium-Second-Edition