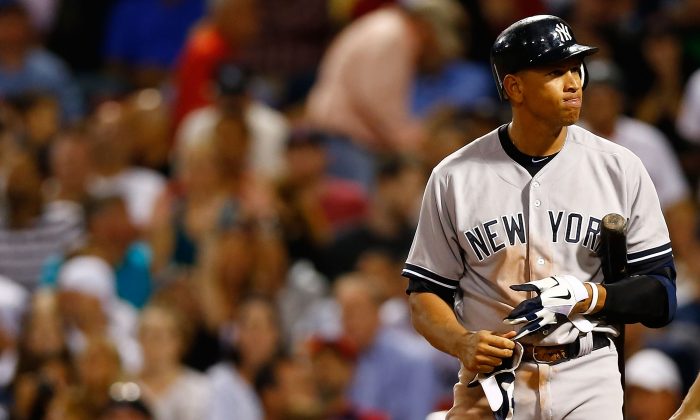 Alex Rodriguez #13 of the New York Yankees at bat against the Boston Red Sox during the game on September 13, 2012 at Fenway Park in Boston, Massachusetts. (Photo by Jared Wickerham/Getty Images)
Baseball

Alex Rodriguez announced he will retire after the 2017 season.

The New York Yankees designated hitter shared the news during an interview with ESPN on March 23. His spokesman, Ron Berkowitz, confirmed Rodriguez’s announcement.

The slugger said he will step off the field for good after his 10-year, $275 million contract with the Yankees ends in 2017.

Berkowitz said, “at the end of the contract he’s going to be 42 years old, but we still have (324) games to go until we get to this point.”

“I won’t play after next year,” Rodriguez told ESPN.

“I’ve really enjoyed my time. For me, it is time for me to go home and be dad,” he added.

Rodriguez, who has had a controversial career, returned to the Yankees last season after a one-year drug suspension.

Last season he hit 33 home runs, the sixth most in Major League Baseball history for a player over 38.

According to ESPN, by the end of the 2017 season, the slugger will have made $420 million in career on-field earnings, making him the first professional athlete to surpass the $400 million mark.

Alex Rodriguez, known to fans as A-Rod, was selected as the first overall pick in the 1993 Draft by the Mariners. He debuted in July 8, 1994, and is a 14-time All-Star and three-time American League Most Valuable Player Award winner.